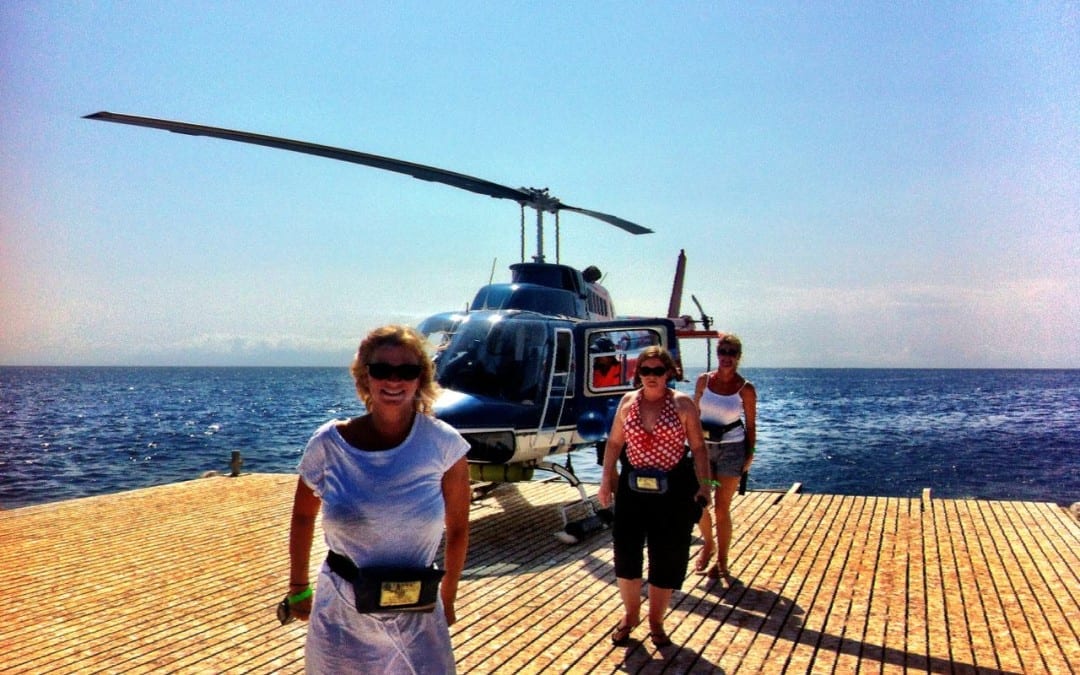 G’day. Literally just got back from a lightning tour ‘down under’! This was my first trip to Australia and it is fair to say I was really impressed with what this great ‘up beat’ country had to offer.

Sydney was our first port of call – with its spectacular natural harbour. Seeing the iconic sails of the Opera House  and taking a tour inside was inspiring especially as we got a preview of the ballet that was on the same day. 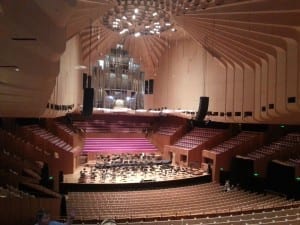 Walking through the Royal Botanical Gardens next to the famous landmark was one of the most magical spots away from the vibrant throb of the city. With 30 hectares of rainforest walks, wishing trees, Orchard butterflies as big as your hand and the sound of kookaburras calling to each other – this really was a beautiful park and judging by the amount of people and weddings throughout its setting – it looks as if the rest of Sydney was enjoying it as well. Our  evening was hosted by the Four Points by Sheraton in Darling Harbour right on the waterfront overlooking Sydney Bridge and the Opera House. And here’s a top tip! Following our delicious meal we went onto the terrace to watch the fireworks that are lit every Saturday – just to give you a flavour of what Sydney at New Year has to offer!

On the second day we visited the picturesque Blue Mountains which was my sort of place – full of fresh air, awesome canyons and valley floors covered in lush eucalyptus trees. 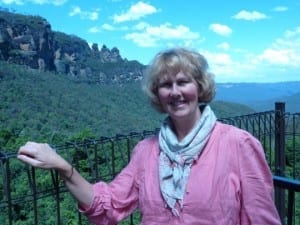 Our guide was wonderful – really informative but in a laid back way. We had our first encounters with Australian wildlife at Featherdale Wildlife Park where we were the first visitors – so able to feed kangaroos, wallabies and see a group of koalas who were really cute. We then climbed the Great Dividing Range and viewed the Three Sisters rock formation in amongst the vast canyons as well as a cable car down to the rainforest and a ride on the world’s steepest railway back up the canyon – not for the fainthearted!

Another early start for an action packed day and we headed towards Sydney Harbour Bridge for our morning bridge climb. Donning our flattering blue and grey jumpsuits, safety harnesses and radios we attempted to climb the most famous bridge in the world. 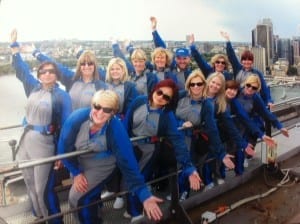 The rewards were stunning views over one of the world’s most beautiful natural harbours and the sheer achievement of climbing the outer arch was really uplifting. I think it helped our climb to spot the band – Coldplay – doing the climb behind us! They had played in Sydney the night before. In the rogues gallery at the end of the climb there was a 100 year old woman who had completed the climb! So it just shows – it’s never too late to get your climbing boots on.

After a sumptuous lunch at the Shangri La hotel we headed for the Ozzie surfer’s paradise aka Bondi Beach. Home to Australian surf culture – there is no better place to take a lesson – and that is exactly what we did. Now I cannot lie and say I actually stood up – but it was great fun trying and the sea was so warm! Our last meal in Sydney was hosted by the Shangri La which is in another fab location right on the waterfront. The rooms were great and the food superb and you could not get a better location if you wanted to celebrate a special occasion.

Up at 5am as our body clocks had not quite adjusted yet – just in time for an early flight to Cairns and some free time to walk around the harbour area and relax in the pool.Queensland is the only place on earth where two World Heritage listed sites meet – the Great Barrier Reef and the Daintree Rainforest. Indeed the rainforest here is assessed to be older than the Amazon!  Our hosted dinner was at the splendid Rydges hotel where the accommodation and food was great.

Next up was a visit to Kuranda – a village in the rainforest by a cable car suspended over the rainforest. I saw lots of beautiful bright blue butterflies on our journey and the cable car ride is reputedly the longest in the world.

We had the chance to meet many indigenous aborigines who demonstrated their wealth of knowledge on hunting with the boomerang and playing the didgeridoo as well as talking us through bush foods and medicine and performing their dances and rituals. 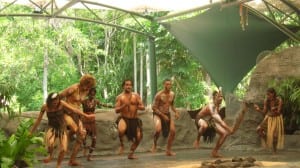 When we were up in Kuranda some of us were able to cuddle Koalas or visit the butterfly farm – or just explore the jungle on a boat spotting crocodiles!

Our free evening was spent sampling the delights of the local super fresh Coral fish and wandering around the night markets of Cairns with an eye on all the massage treatment we could have!

The highlight of our trip was a Quicksilver tour to the Barrier Reef. Top tip – the best location for setting out for the Barrier Reef would be Port Douglas, Palm Cove or Cape Tribulation. We departed early from Cairns by coach so we could get to the 45.5 metre high speed wave piercing catamaran to commence a full day cruise. The trip was really calm for those of us who were worried about sailing and there were plenty of natural remedies available on board if it was still a problem.  This was what we had all been waiting for.  We travelled in comfort to the renowned Agincourt Reef on the outer edge of the Great Barrier Reef. Quicksilver has facilities to enable both swimmers and non-swimmers to experience this stunning reef world. If you don’t fancy getting your toes wet there is a semi-submersible, an underwater observatory or a scenic helicopter ride or just sitting having lunch and taking in the view from the platform is a treat in itself. 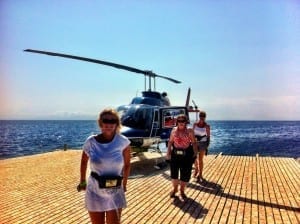 Or for the adventurous minded – snorkelling, diving or walking down a platform for an Oceanwalker helmet dive was on offer. The sea really is as blue as the pictures portray and the experience of snorkelling above the coral reef with all the shoals of fish and Nemos or clown fish will stay with me as one of the best activities I have ever done. 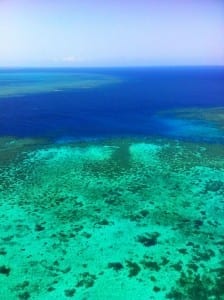 Marine biologists were resident on board the platform so if you wanted in depth guidance on what you were seeing underwater – they would accompany you which was brilliant. Some of the divers spotted a turtle and dolphin and we saw a very large fish lurking on the bottom of the reef – but it was not a shark! What a fabulous day we all had – with the added bonus of a short trip in the helicopter to give us all huge grins when we made our way back onboard our trusty catamaran. The day ended with a few drinks out on deck to catch the last of the sun and watch the wide sweeping panoramas whizz by whilst recounting our adventures. What an incredible day! We were dropped back at our new location in Palm Cove which was quieter than Cairns and quite small and exclusive with lovely hotels and restaurants along the beach.

Our last day was again one of my favourites as we ventured deeper into the Daintree rainforest to an area called Mossman Gorge. This was a really authentic aboriginal experience as the group met a couple of indigenous people who performed a ritual fire lighting which we had to circle to make friends with the spirits before we entered the forest. Our guide was brilliant and he demonstrated traditional plant use eg making soap in one of the cool streams, how to identify bush tucker sources, and provided us with an enchanting narrative of the rainforest and his special relationship within this tropical environment. After our walk along easy graded tracks he made tea and gave us damper bread with some of the locally gathered honey. What a treat. We then stopped off for lunch at Silky Oaks Lodge which is one of the best spas in Australia. 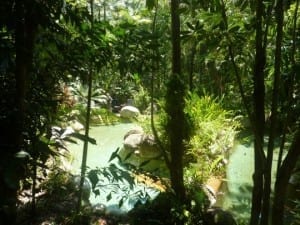 The gorgeous setting in the rainforest with all the houses on stilts and the restaurant overlooking the river. This was one of the best barramundi we were lucky enough to sample and it really was a special location for anyone thinking of a honeymoon.

But it got better – as we moved to our next overnight stay at Thala Lodge near Port Douglas – overlooking theCoral sea again in the rainforest setting. Empty beaches and turquoise water – as well as stilted hideaways in the rainforest made this night really magical. The colour of the birds was incredible and they had a few feeding stations so the ornithologists amongst us got a really good view whilst eating the splendid breakfast they prepared for us the next morning. Thala had its own resident naturalist where you could enjoy complimentary nature tours to explore and understand all the colourful birds, butterflies, reptiles and astonishing vegetation. My room mate and I sat on the balcony watching the worker ants travelling up and down a big tree in front of us – it was fascinating.

Our night in Port Douglas was spent at Peppers Beach hotel where once again the welcome was so laid back but our last dinner was exceptional.

The journey back home was on the new A-380 airbus with Quantas and I was really impressed. It is meant to be 70% quieter than a 747 and it was so smooth I could not even feel the take off! The skycam camera on each back seat entertainment screen meant each person had a bird’s eye view of what was outside so you no longer need a window seat! And we had the added bonus of Ronan Keating travelling admittedly a few classes higher than us – in first class- on our plane. What a great end to a wonderful trip down under. Who said work was not fun!?

Suzanne travelled with ‘Travel 2’ to Australia who are one of our leading tour operators for this country.