A Week in Washington 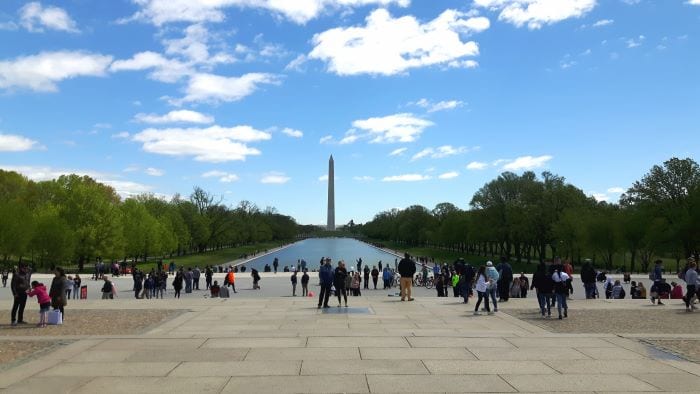 Camilla and her partner Tom enjoyed a wonderful week exploring the city of Washington and packed in an enormous amount of sightseeing (and eating, it would seem) in their brief visit.

Flying with United Airlines from Heathrow to Washington Dulles was as pleasant and comfortable as a 7+ hour economy flight could be, good service, entertainment and plenty of leg room (at least for me at 5’0”!) We arrived late in the evening and made our way straight to our downtown hotel.

The Beacon Hotel and Corporate Quarters was well located, at Dupont Circle. We started the day by heading just around the corner to Wicked Waffles, serving up light crispy waffles with toppings you would never imagine, I would highly recommend it, but not every day!

We had tickets for the Washington Nationals vs Pittsburgh Pirates baseball game at the Nationals Stadium. As the game didn’t start until the afternoon, we took a stroll towards the White House, which we happened upon much sooner than expected. Arriving from the north side we were greeted by protesters and their picket signs. The iconic house is smaller than I expected and more recognisable from the south side, but it was certainly a tick on the list. 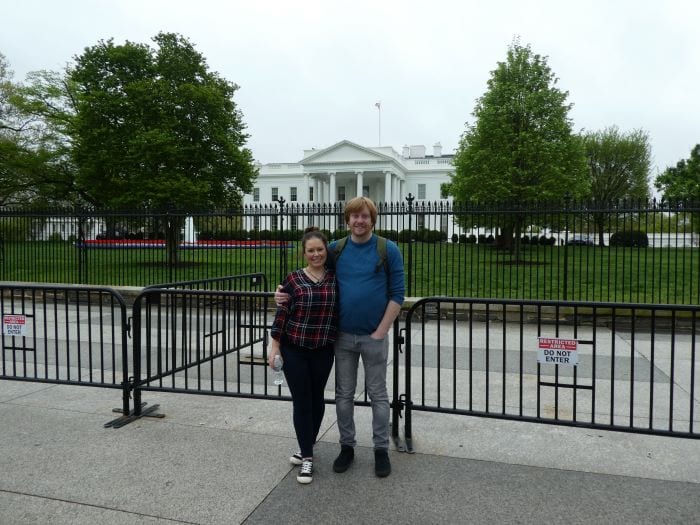 We took an Uber to the baseball stadium, arriving before the game started. As fans were arriving and filling seats, we made the most of happy hour with supersized beers. Thankfully baseball is basically rounders, so we were able to follow the game, during which we consumed the obligatory hotdogs and nachos. Unfortunately, the Nationals lost, but it was a close game. 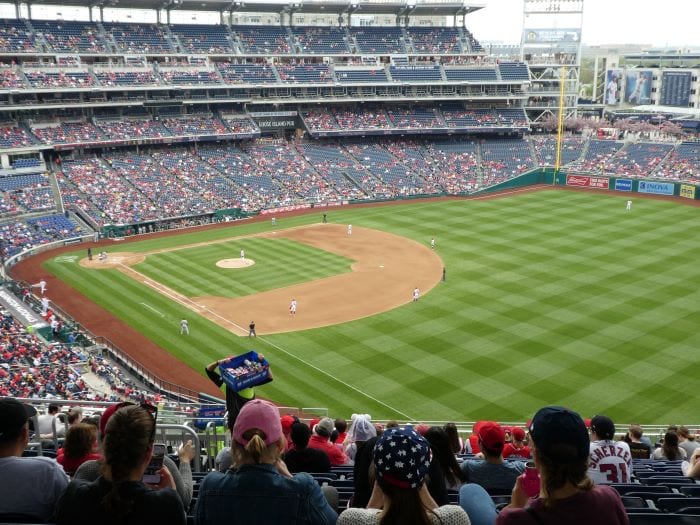 We walked back towards downtown, stopping at the District Wharf for drinks overlooking the Potomac River and filling up on fried shrimp from the fish markets. At twilight we continued passed the Washington Monument lit up against the darkened sky and strolled past the south side of the White House, more recognisable across the tailored lawns.  The photo of the Washington Monument below was taken later in the trip in better light!

This morning we had booked a guided tour of the National Mall with Urban Adventures. We met at L’Enfant Plaza metro station and hopped in the all-electric Red Roadster, perfectly designed for snapping all the landmarks en-route. Steve, our guide was enthusiastic and knowledgeable and filled us in on the city’s origins, the history of the Smithsonian Museums and answered all our questions. We made stops at the Capital Building and the Washington Monument for some classic photo opportunities. 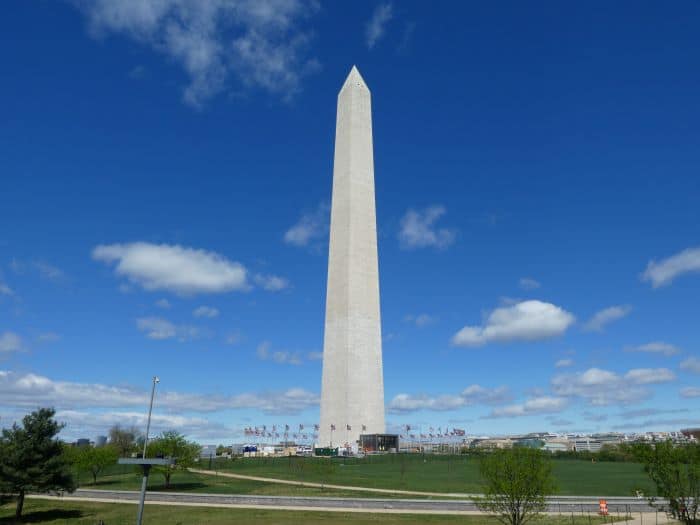 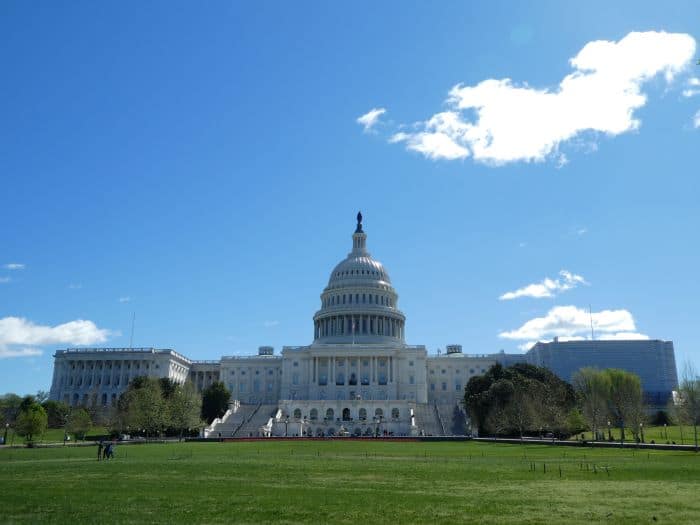 On our way to the Tidal Basin we were pulled over to make way for the Presidential motorcade, before driving past the Jefferson Memorial. We also had time to walk around the Martin Luther King Memorial, the Lincoln Memorial and The Vietnam War Memorial before Steve drove us back along the National Mall past the White House to the Smithsonian Museums. There are 17 Smithsonian museums in the DC area and they are all free.

We filled the afternoon exploring the National Air and Space Museum with highlights including the 1903 Wright Flyer, the first successful heavier-than-air powered aircraft flown by the Wright Brothers, and the Spirit of St Lewis, flown by Charles Lindbergh in 1927, on the first solo nonstop transatlantic flight. My personal highlight was Amelia Earhart’s Lockheed Model 5B Vega, the plane she flew to become the first female aviator to fly solo across the Atlantic. 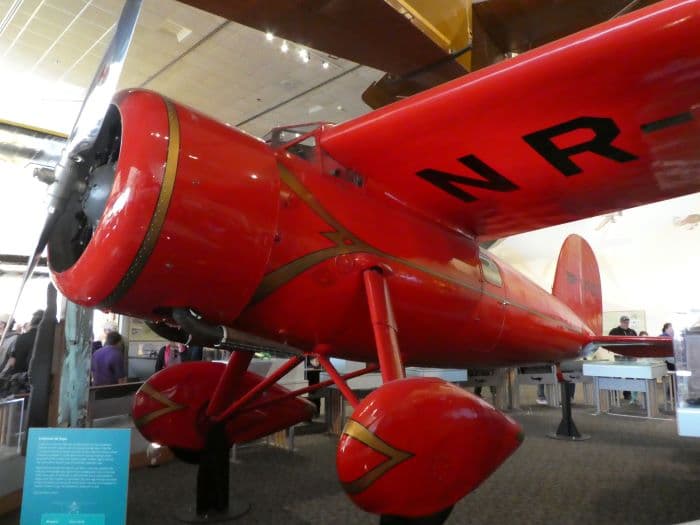 Next, we visited the National Museum of the American Indian, filled with artefacts and exhibits portraying the way of life and later the disturbing history of the Native American people.

After a long day of sightseeing and museums we made our way back to the hotel via Hill Country Barbecue Market on 7th Street, for some authentic American Barbecue.

Today we decided to take an Uber to George Washington’s Mount Vernon, the estate which was home to George Washington, the first president of the United States and Martha Dandridge Custis Washington, his wife. It is about a 40-minute drive south along the Potomac River. The property covers 500 acres and consists of the mansion, over 30 outbuildings, gardens and farm land. There are also museums depicting the life of the Washington’s as well as slavery exhibits and interactive experiences on site, plenty to full a whole day, you can even see George Washington’s dentures!

With such beautiful spring weather, we decided to have a picnic dinner on the Ellipse in front of the White House, south side, with views of the Washington Monument. On the north side, on our way back to the hotel, we were engrossed by the protests which seem to be a daily occurrence on Pennsylvania Avenue.

The next day we discovered the best way to tackle the streets of Washington. Wherever you go you can pick up an electric scooter using apps such as Lyft, Uber, Spin and Bird, you are charged a few cents a minute and you can leave the scooters anywhere when you are done! We scooted through the busy streets and back over to the National Mall to visit and revisit some of the memorials, including the Korean War Memorial and the Lincoln Memorial. 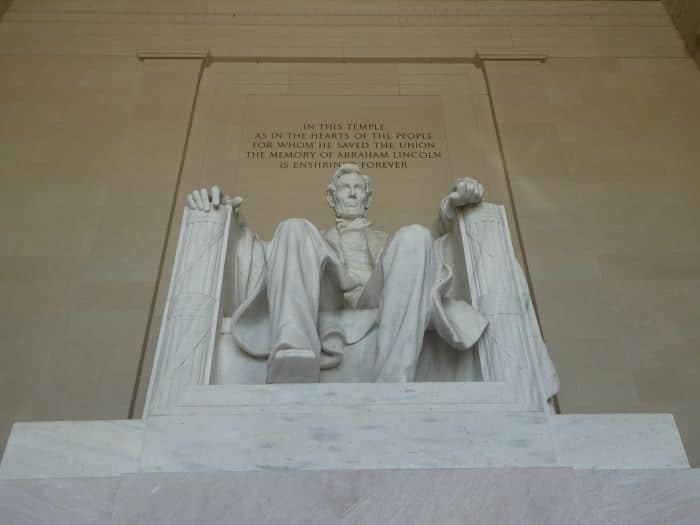 Then we scooted along the reflecting pool down the Mall, past the Washington Memorial to the Smithsonian’s.

We decided to visit the American History Museum first, there are exhibits dedicated to military wars, transport, music etc and the original Star-Spangled Banner is on display. Being a country with such a short history these exhibits were subsidised with a surprising amount of pop culture items, so for history buffs it may be a little disappointing. However, if you want to see the 1989 Batmobile from ‘Batman’, the Swedish Chief from the Muppets or Captain Americas shield this is the place! I must admit the ruby slippers worn by Judy Garland in ‘The Wizard of Oz’ were my overall highlight.

Next, we visited the National Museum of African American History and Culture, which opened during Obama’s presidency. There are 3 levels of galleries displaying African American contributions to American culture through sports, music, visual arts and much more. There are three further levels below ground which take you on an emotional journey through history, moving through the slave trade, emancipation, segregation, the civil rights movement and the struggle for freedom and equal rights. It is a well thought out museum and well worth a visit.

Finally, we squeezed in a quick visit to the National Museum of Natural History to take a look at the Hope Diamond, the largest-known deep blue diamond in the world.

Back on the scooters we made our way to Bens Chili Bowl on U Street. Famed locally for its chili-dogs and approved of by Barack Obama, we were suitably impressed and filled.

Again, the scooters saved our aching feet as we made our way to Ford’s Theatre on 10th Street, famous for being the site of the assassination of Abraham Lincoln on 14th April 1865, Good Friday. Inside the theatre, looking across at the box where Lincoln was shot by Confederate sympathiser John Wilkes Booth, we attended a 1 act play about Lincoln’s assassination exploring key facts and events leading up to and following the fateful event. 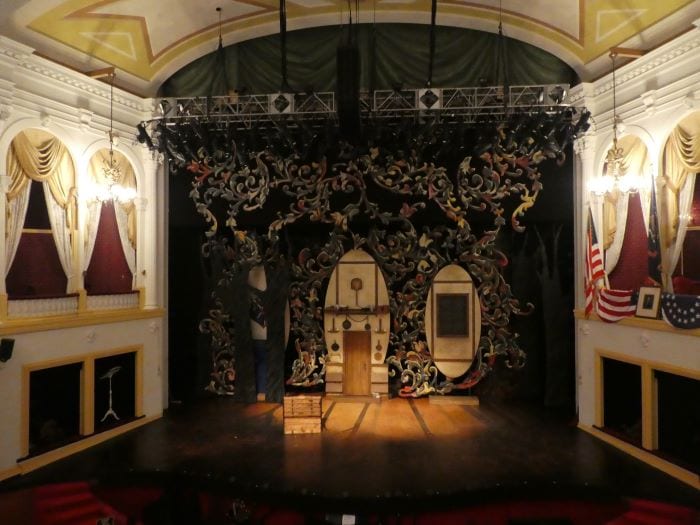 We were then taken across the street to Petersen House where the president passed away the following morning. We left through the Aftermath Exhibits, outlining the hunt for Booth and his conspirators and Lincoln’s legacy.

We made a quick visit to Union Station, which has been restored and is an impressive building inside and out. We couldn’t leave town without checking out the Watergate Complex in the Foggy Bottom neighbourhood, famous for the Watergate scandal in the 70’s resulting in President Nixon’s resignation.

Next, we headed over to Georgetown, a historic neighbourhood with Federal-style architecture and cobblestone streets for a bite to eat at Clyde’s. After a stroll down the riverside promenade along the Georgetown Waterfront Park we stopped for cocktails overlooking the Potomac River as the sunset.

We squeezed in one last scooter ride, revisiting the National Mall and White House by night. It is worth doing as all the monuments and memorials are lit up, a peaceful sight.

We thought we should start our final day with a proper American Diner breakfast with pancakes and all the trimmings, so we headed over to ‘The Diner’ on 18th Street for eggs, pancakes and iced tea.

We took an uber to the Steven F. Udvar-Hazy Center, the second site for the Air and Space Museum near Dulles Airport. Two large hangars display thousands of aviation and space artifacts, including a Lockheed SR-71 Blackbird, a Concorde, and the Space Shuttle Discovery. 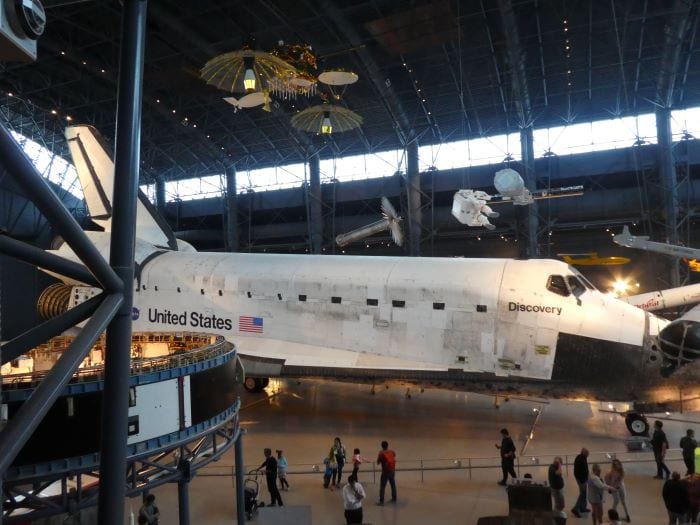 It also houses the Enola Gay, the B-29 bomber that was used by the United States on August 6, 1945, to drop an atomic bomb on Hiroshima, Japan. It took us several hours to see it all, then it was time to head to our airport hotel for our last night in DC.

On our final morning we received an e-mail from United Airlines informing us our flight was delayed over 9 hours! So instead of an early start we slept in and landed back in the UK much later than planned.

I’d highly recommend a city-break in Washington of up to a week’s duration, or combine 3 or 4 days here with 3 or 4 also in New York or Boston.  Trans-Atlantic air fares have greatly reduced in cost in recent years and made a short break increasingly accessible for most budgets.   Speak with me about putting an itinerary together for here or other US cities and I’ll be glad to help.    Camilla.