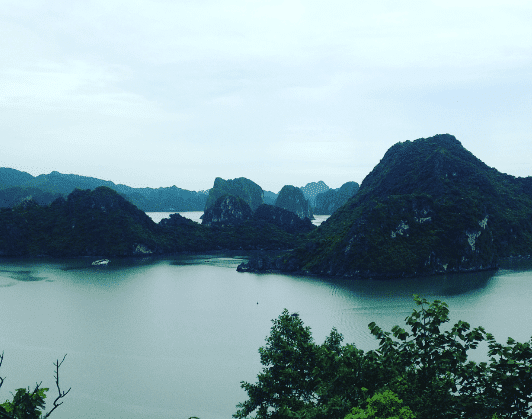 Visiting Vietnam had long been on Abbie’s travel radar and she has now returned from a 12 day trip through the country starting in Hanoi before journeying south via Hoi An and Hue to  Saigon.  Here are her impressions of this very vital and vibrant nation.

After flying direct with Vietnam Airlines I arrived in Hanoi where the first thing to hit me was the heat and humidity, a welcome change from the grey British summer we were having.

After a quick freshen up we hit the streets of Hanoi for a walking tour of the Old Quarter. Hanoi has a lovely atmosphere with layers of history revealing French and Chinese influences. The French influence is still present as we feasted on the local street food ‘Banh Mi’ which is a fresh baguette stuffed with tasty pork and salad.  At under £1.00 for lunch and a drink this was certainly a bargain but not unusual for Vietnam.

The Old Quarter is made up of 36 streets all named ‘Hang …’ with the second word relevant to what commodities are being sold. Our hotel was located in Hang Gai Street which translated into Silk Street. We finished our walking tour with a stroll by the Hoan Kiem Lake and a photo opportunity of the Red Bridge. 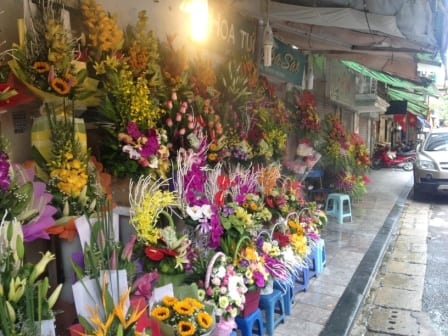 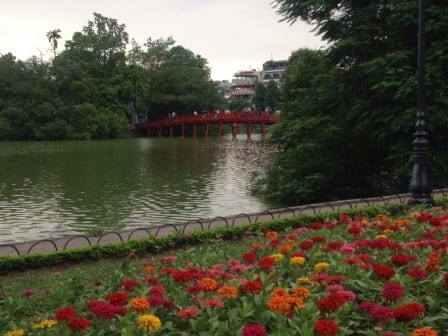 The next morning we had an early start for our journey to Halong City, the gateway to Halong Bay. The journey is a long one at 4 hours but well worth it! We boarded our boat which would be our base for the night as we sailed through the dramatic limestone karsts and turquoise water. After enjoying lunch and relaxing on deck we anchored near Cua Van Floating Fishing Village. It is an excellent example of how well the Vietnamese fisherman adapt to their surroundings, with the village rising and falling with the tides, sheltered by the limestone mountains. The best way to explore this village and the beautiful surroundings has to be by kayak and a couple of us enjoyed a late evening paddle.  It was magical!

The next morning we had the opportunity to partake in sunrise ‘Thai chi’ on the top deck – a lovely way to wake up and enjoy the stunning view. After this we sailed to Titov Island, a small island with fantastic panoramic views of Halong Bay.  After the climb there was the opportunity to cool down on the beach. 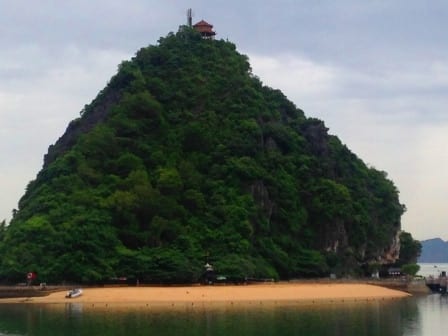 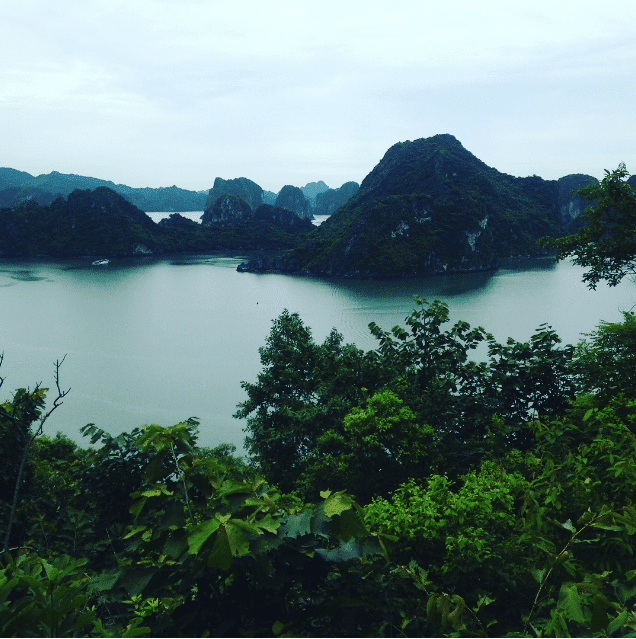 We then headed to Hanoi airport for our first internal flight to Da Nang where we had a short transfer to our hotel in Hoi An which is our home for the next three nights.

We ventured into Hoi An that first night for our first glimpse and a quick bite to eat.  I loved it here! There was a buzzing atmosphere and the centre of Hoi An is a pedestrian zone between certain times so you are free to wander the streets without the fear of being run down by a moped! There is a wide choice of places to eat and drink and I ended up in Mango Rooms, an upmarket restaurant with the most incredible food. A main meal with a couple of beers set me back £8.00 which was one of the most expensive meals I had during the trip.

After a good night’s sleep I felt refreshed and ready for a busy day. This morning we joined a ‘JackTrans Eco Tour’ and became fishermen for the morning. This trip gave me an insight into just how hard these local fisherman work. We started by learning how to throw the net off the fishing boat. Weighing 10kg and keeping your balance isn’t easy but these guys made it look effortless. We then took the smaller basket boats through the narrow coconut palm waterways before finishing with a seafood lunch on board – but sadly nothing we caught as we blanked every time! 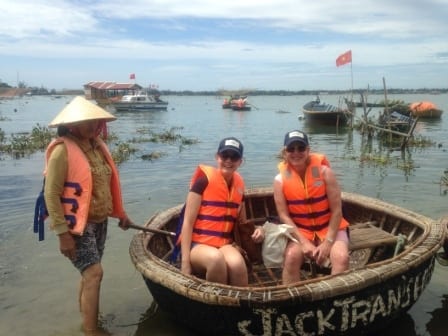 In the afternoon we were guided through the enchanting streets of Hoi An. We were able to see the Japanese Covered Bridge, built in the 1590s by the Japanese community to link them with the Chinese quarters. This was followed by a visit to a Chinese Assembly Hall which is today a temple for the worship of Thien Hau.

The next morning we had some free time and I decided the best way to explore was to hire a bike which I did from the launderette across the road at $1 for the day. At first it seemed intimidating with cars and mopeds rushing past but I quickly got into the flow of things and realised that the traffic is organised chaos. I cycled around the streets early enough to see stall holders and shop keepers setting up for the day, before heading to a great little coffee shop for a quick pick me up. Coffee culture is huge in Vietnam and surprisingly the world’s second biggest exporter of coffee.

Later we headed into Hoi An for our cooking class. We started with a tour of the markets with our chef and learnt about the different knives and blades used to make the beautiful garnishes. We then were told about the spices and sauces used in Vietnamese cooking before finishing in the fish and meat section and finding out how to check if they are fresh. We then headed to the Red Bridge Cooking School where we were taught how to cook some authentic Vietnamese dishes and sample our skills. 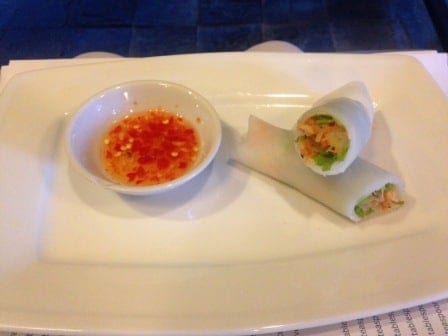 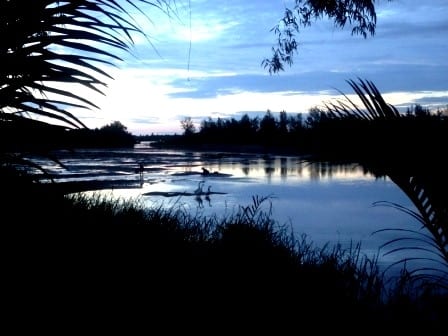 We sadly leave behind Hoi An the next morning for our onward journey to Hue. The drive is spectacular via the Hai Van Pass which is featured on the Top Gear Vietnam special.

Hue was Vietnam’s capital throughout the Nguyen Dynasty and is a city rich in Vietnamese Buddhism.We started our city tour with a visit to the summer palace of the former emperor Tu Duc. Designed by Tu Duc himself to enjoy while alive and to keep his memory after his passing. After lunch we headed to the Citadel and Imperial Palace. Much of the Citadel was destroyed during the war but it has been gradually restored. We then visited Thien Mu Pagoda, each of its seven storeys is dedicated to a manushi-buddha. 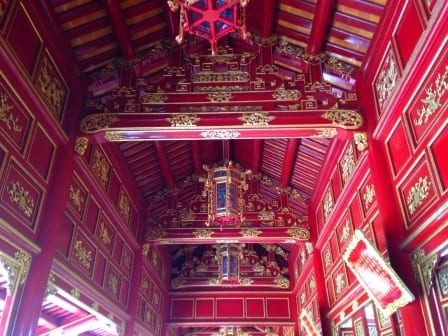 The next morning we took our second internal flight to Saigon. Saigon or now known as Ho Chi Minh City is Vietnam’s largest city and this becomes apparent on the drive from the airport – the traffic is heavy and skyscrapers line the streets. We started our time here by sampling a very traditional and popular lunch ‘Pho’. Pho is a noodle soup with beef, chicken or seafood, and lots of condiments to spice it to your taste. In the afternoon we walked through the heart of the city seeing the Notre Dame Cathedral and the Central Post Office. We ended the afternoon with a very emotive visit to War Remnants museum and it was here that the shattering devastation caused by the war really hit home. 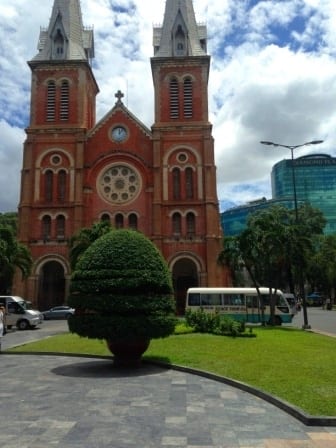 The following day we drove for 4 hours to Can Tho, where we began our Mekong Delta experience. We boarded a junk boat and sailed deep into the Mekong Delta, watching the scenery becoming more green and fertile and less industrial.  We had the opportunity to walk through a village and see how self sufficient the locals are. Growing is an array of exotic fruit and rows of rice in the paddy fields, most houses also keep livestock.

After a good rest on our comfortable boat we headed off to Cai Be where we visited the floating markets. It’s very busy here early in the morning with wholesalers mooring.  Each specialises in various types of fruit and vegetable and they hang a sample of their goods from wooden poles to advertise what is being sold from their boat.  After this we visited a local candy and cake making factory and there is also opportunity to sample traditional snake rice wine, which locals believe to be a natural aphrodisiac. 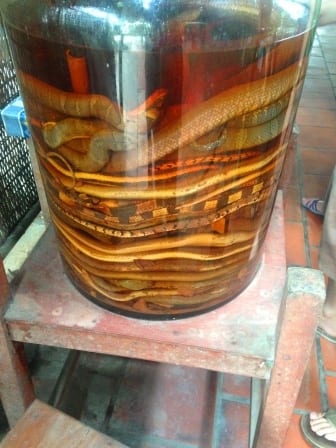 Our trip finally came to an end but not before a memorable trip to the Cu Chi tunnels. The extensive tunnel network stretched over 250km and extended several levels below ground. The tunnels were used by the Viet Cong soldiers to house troops, lay booby traps and carry out surprise attacks after which they could disappear underground. 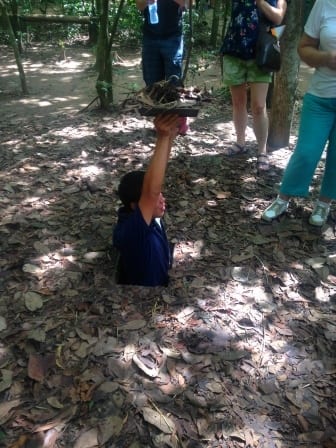 The incredibly welcoming people of Vietnam won my heart and my experiences here – the wonderful sights and amazing food – has made this one of the very best places I’ve visited.