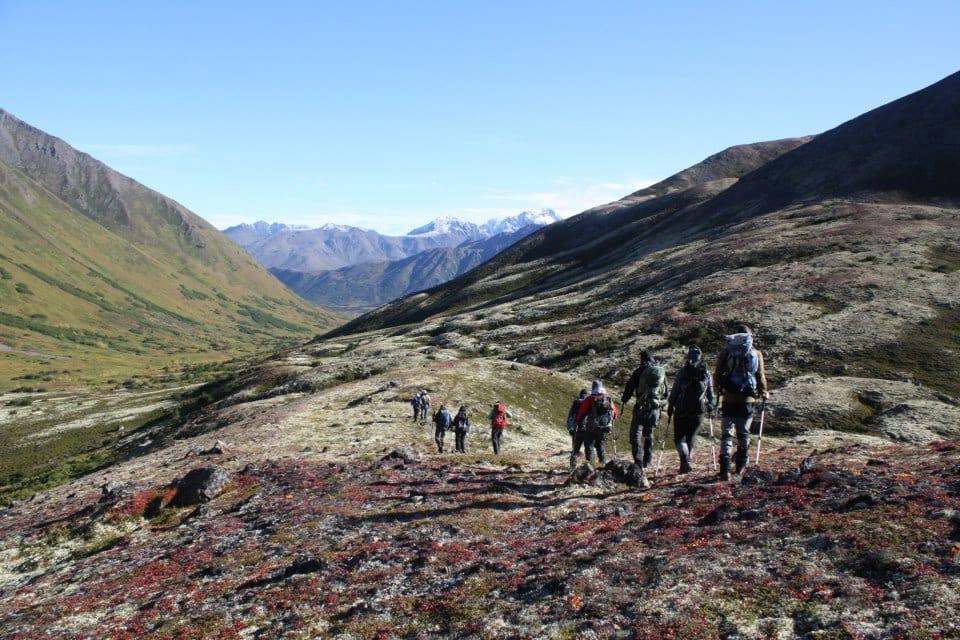 20 very determined staff from Wickes have recently returned from Alaska where they spent 2 weeks hiking, ice-climbing and river-rafting to raise funds for Leukaemia & Lymphoma Research.  Over the past 6 years Wickes have raised over £2million for the charity dedicated to research into blood cancers by undertaking endurance events overseas. Suzanne at Nomadic Travel was delighted to assist them with arranging their latest adventure.

To give a flavour of what they encountered in the Alaskan wilderness, here is an excerpt from their daily ‘blog’ …

By the time anyone else was up, Jeremy was already on his way down from his first climb of the day having scrambled up the 500ft ridge behind camp to watch the sunrise. The air was clear and the sky above us was free of clouds, below us the coastal strip was covered by a blanket of white cloud of which only the tops were visible to us camped 2,000ft above them. In the far distance, the other side of the bay, the Alaska mountain range was visible, blushing in the first rosy light of day as it towered over everything else. 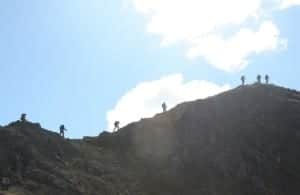 Gus cooked us fantastic scrambled egg, Gouda cheese and Reindeer sausage wraps for breakfast and we sat and ate them while watching the light creep further down the valley sides as the sun crept over the pass at the head of the valley.

Our plan for the day was to hike to the head of the valley and climb over the pass and descend into the next valley where the map showed another lake beside which we hoped to find enough flat land to pitch camp. From where we started we could see a peak which looked like it might be climbed by following the ridge at the top of the pass over a small hog’s back hill and then up the gently sloping snow covered east face. We would be better able to see if it was possible when we got to the top of the pass.

First we needed water so we followed our daily routine of walking to the nearby stream to fill our water bottles. The water here comes straight of the mountain side from the melting snow so apart from the flavouring or electrolytes which some people add it’s ready to drink.

This was our fifth consecutive day of walking and we have built up between us quite a collection of blisters, aches and pains so it took us a while to warm up but soon enough we were at the top of the valley where the ground rises more steeply up to the pass. The sun was shining down on us today so we stopped at the bottom of the rise to remove a layer of clothing in anticipation of building up some heat on the climb. 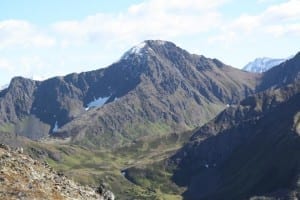 Removing a layer was the right thing to do as the climb was steeper than it looked and we burn quite a few calories under these packs. Once at the top we could see that the peak we had our eye on was indeed accessible and so after a short break we dropped our packs, tied jackets around our waists and with just water and emergency chocolate, set off.

Although we’ve been in plenty of snow this week, for many in the group this climb represented an exciting ‘first’. Their first snow capped peak.

The hog’s back was easy, a gentle incline dusted with snow but with sound conditions underfoot, levelling onto a broad flat top before running into the face of the mountain which was also the start of the deeper snow.

The angle of climb was reasonably steady but quite steep and the snow depth quite inconsistent making it a tricky climb with plenty of chances for your footing to give way and to end up with your face in the snow. For first timers quite scary.

The whole team made it to the top after a snow scramble lasting about an hour. We’d named yesterday’s summit Hannah’s ridge after her heroic climb to the top, today it has to be Kelly’s Peak in recognition of how she overcame real fear to reach this mountain top.

The descent was much more fun than the climb up, the snow holds your feet well if you dig your heels in and you can almost march down even a steep slope, so we were down to where we’d left our packs in no time. 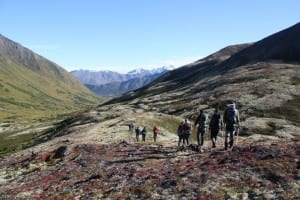 From the pass we could see the valley spur and it’s watershed lake which was where we were heading, it looked beautiful enough to be on the front cover of any holiday brochure and we wondered if the lake would be warm enough for a swim?

But first we had to find our way down the very steep slope. At first it was barren and rocky where the mountain winds scour the surface making life impossible even for the hardiest of the little alpines which cling to the rocks up here in the most unlikely places. Further down as the slope steepened and became more difficult, so the surface was more protected from the wind and the small plants reappeared to bind the loose rocks together and give us safe passage.

It was here we saw the first evidence that we were in bear country, in two places on the way down we saw holes in the ground where bears had tried to dig out ground squirrel burrows in search of a meal. using their giant claws to drag soil and rocks alike from the ground they had made quite a mess.

The ground around the camp was flat with more room than we needed so we could spread out, as far from Ron’s snoring tent as possible – except for Nick who has to share it.

Jeremy was first in the lake for a much needed wash, it was very cold – about as cold as water gets without turning to ice – but very refreshing! He was quickly joined by James, Ian, Caroline, Mark, Melissa, Paul, Nick, Dave, Darryl and Ron. Some even tried swimming a few strokes but quickly thought better of it. For a while the valley rung with the noise of people gasping for the breath knocked out of them by the freezing water and the hoots of laughter at the looks on their faces as the water touched various different parts of their bodies.

The rest of the group decided they could wait another 48hrs for a wash in something warmer – they were probably right!

For dinner we had the unusual combination of spaghetti with chicken and peanut butter sauce. Not as bad as it sounds – you should try it.

It started to rain as we headed for bed, fingers crossed for tomorrow…. 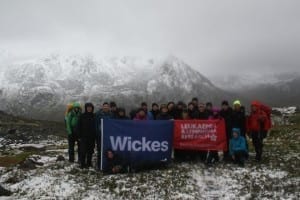 Please remember that Wickes undertake these challenges to raise money to help prevent people, often children, from dying from blood cancer. If you can afford to make even a small donation please do so at www.justgiving.com/wickesalaskachallenge