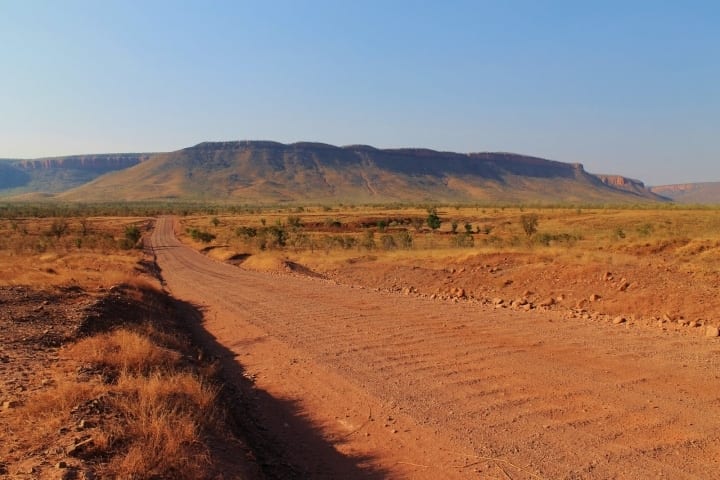 We awoke the next morning and decidied yes we would go to the Mitchell Falls – we had declared this as a possible destination to Britz so we were covered by the insurance!

I shall never forget that journey up through the valley towards the Cockburn ranges. It was a slightly misty morning and as we came over the crest there were two walleroos in the road with their backs to us facing the Cockburns – it was just magical but sadly they had gone before I got the camera out. Once we were back on the Gibb River Road we had the first of our really big crossings to negotiate – The Pentecost River – not that deep but very, very wide. We stopped to have a look at it and watch how everyone else was managing it and what routes they were taking. 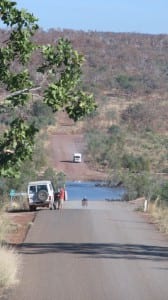 There were even a group of bikers attempting it – three road acroos very skillfully and 2 walked their bikes across.  In the picture below you will see that there some types of vehicles not to use – the white Hiace was NOT built for it and ended up tearing a wheel off at the last part of the crossing. He was not a happy camper! the bottom of the river was made of very large stones so our trusty Troopie sort of bunny hopped across them but we reached the other side really easily – Pheww!! 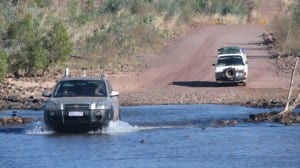 We were now on our way to Drysdale Station – we travelled about 100 km and then to our amazement we saw a sign which said “Cream Teas” – well it would have been rude not to so we did a 8km diversion and had a cream tea at Ellenbrae Station. 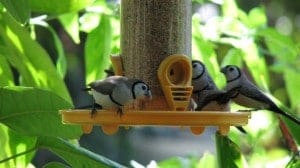 They also offer holidays for birding enthusiasts and their garden was teaming with verious birds – the easiest of which to photograph were these zebra finches. It made a nice interlude from the bumpy road which was getting worse the further along we went. We then took a right onto the Kalumburu road which is the way to the Mitchell Falls. We finally made it to Drysdale Station we had now driven about 300 kms but it had taken us over 6 hours. The road into the station was dire – the corrugations were so deep that the contents of our vehicle was shaken to death but the station was wonderful – clean showers, a bar, a shop selling goodies like big slabs of fruit cake – needless to say we bought one. They also had a flight desk where you could fly up to the Mitchell falls for the day – but we decided to plough on. Both of us had a bit of a restless night – a bit anxious about the drive the next day which we knew was very rough!

The next morning we were off by 0700 and we were surprised that the next bit of the Kalumburu Road wasn’t too bad but when we got to the Mitchell falls turn off it deterioted big time. Lots of pot holes, bull holes and boulders. The first bit to really scare me was the King Edward River crossing. This was the deepest river we crossed and it was flowing very fast – so I was glad to be in my troopie and not some smaller 4WD. 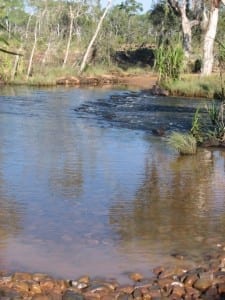 Beyond this river crossing was the area where the King Edward floods every wet season – the ferocity of these floods must be awesome – there were trees with other smaller trees uprooted and held within the branches of the larger ones and some huge boulders looking like they been tossed like small pebbles from the river bed. It just reinforces why you cannot visit this region from December through to the end of April – it would be just impassable. The vegetation began to change the highter up onto the plateau we got – lots of palm trees which I had not expected to see in North West Australia. We caught a fleeting glimpse of some dingos and we saw a pair of the very large black parrots with red undersides to their wings which we never did manage to catch on camera. So after another five hours on the road we finally reached the Mitchell Plateau National Park camp site – a total of 260kms. We went and looked at the helicopter flight schedules and costs – we needed someone to share!! After lunch we set off to walk out to Little Merton Falls for a swim in the deep pools there. We also climbed up behind the falls to see the Aboriginal rock art. 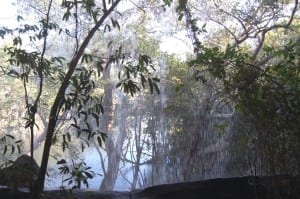 Back at the camp site we set up camp and made our first camp fire. These NP camps have long drop loos but no shower facilities, so the dip in the pools had been great. We also met up with Kim and Helen an Australian couple who wanted to share a helicopter trip with us – brilliant! This meant we would trek the 4 kms up to the falls and then be picked up by the copter and be taken not only up above the falls but also on out to the coast and back up the Mitchell River valley for about an hour. We were very excited by this thought and spent a very pleasant evening listening to music by our camp fire. 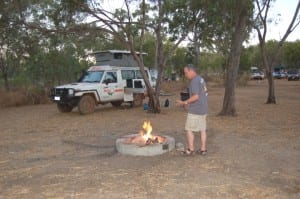 The following morning we set off with Helen and Kim  to walk to the falls. They lived in Kununarra and were excellent company. They loved going bush as he described it! The walk out to the falls was pretty and we passed over Big Merton Falls which was stunning but very high! To get to see the Mitchell Falls you need to cross the river – it was quite deep and it was great fun watching the attempt of various people to get across – the trick was to keep your shoes on as the rocks were very slippery. Once across you could scramble down to a view point and the view was just sensational. As it was June there was still quite a lot of water coming down – it drops in four stages and the noise is phenominal. 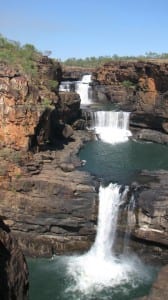 We stayed and watched it for ages and then Kim noticed a fresh water crocodile at the base of the falls sunbathing on a rock – our first site of a “freshie” as he called it!. we then had time for a quick river swim and lunch before we met our helicopter at the landing pad. Exciting or what – there were no door on the sides – Kim sat in the front and the rest of us in the back. You wear big head phones and had a microphone so you could all talk to each other and the pilot. The views from it were just wonderful, Arial views of the falls, across the plateau, the beaches, azure seas with dugons and dolphins and on the beaches some monster salt water crocodiles or salties as Kim called them. We could also see Aboriginal burial sites from above and the pilot’s commentary was excellent. Although it was a lot of money it was so worth it and it was an experience I would urge everyone who goes up there to take.

Once we were back at camp we headed back the rough road to the King Edward national Park Camp site. This was my favourite camp of all the trip – right beside the river with masses of bee eaters, cockies and numerous other birds around the camp site. The river had big pools in which was wonderful for swimming in and getting rid of some of the red dust from the road travel. 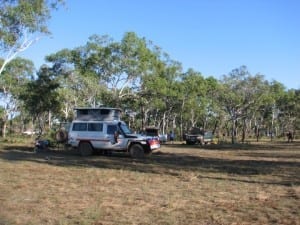 As dusk fell we heard a pack of dingoes in the distance a very eirie sound.

The next morning we spent some time talking to a group of Australians from Perth who were on a “Tag Along Tour” – about 8 vehicles travelling the outback together – the Australians really so love their country and the more remote these tracks are the happier they are!! We set off back down the track to Drysdale where we stopped for some fuel – our Troopie was a bit thirsty! We then set off for Mount Elizabeth which is a cattle station which has a camp site attached. The attraction was a proper shower and the chance to see a working cattle station. The road into the station – so like your own drive was 39km long – the station was so pretty and had lots of wallabies all around the grounds. Sadly we would miss the tour as the men were all away from the station at a funeral. 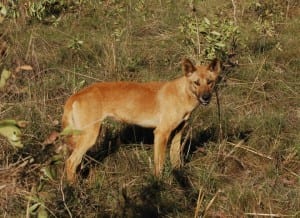 We had a general chill down that afternoon and were amazed to be shouted at by some campers walking across the camp field – it was Kim and Helen and we spent th rest of the evening with them – Helen showed me how to make damper bread in the camp fire and spent a great evening with them. They gave us a great insight into the hardships of Kimberly life in “The Wet” and how hard it is for people who live here to make a living.

We carried on down the Gibb River Road the next day and made our way to Tunnel Creek and Windjammer Gorge. The first is a massive tunnel in which a river flows under all the cliffs and emerges 2 km later on the other side – much too dark and claustrophobic for me, although I did venture part way in part way. 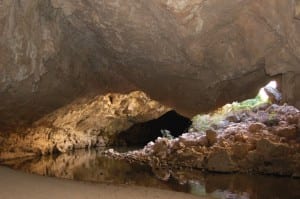 We had lunch there and then set off for Windjana Gorge – it was a fabulous place – magical sandy banks on the river with basking fresh water crocodiles, majestic cliffs on wonderful rock formations and birds absolutely everywhere. This gorge does get visited by a lot of people as it is accessable on a day trip from both Broome and Derby so it was important that we walked it all in the early morning to see it at it’s best.

This was the last of our tough driving for a while we would hit the tarmac as we headed for Derby and then a bit of a break in Broome. Time for a stock up – we were down to fruit cake and crisps for our last lunch! Log in again soon to see the final part of our adventure which will include Derby, Broome, Bungle Bungle and Wyndam. 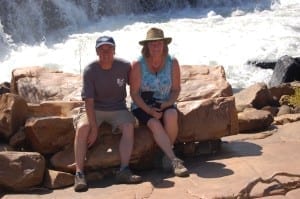