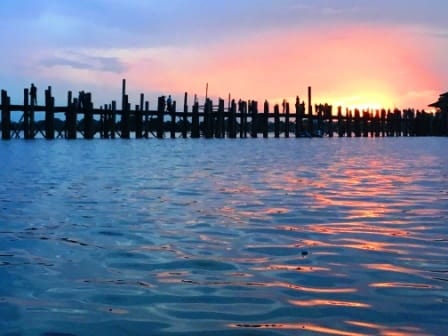 ‘Mingalabar!  – This beautiful greeting which means ‘auspiciousness’ is well suited to this fascinating country,’ says Abbie, who has just returned from visiting Myanmar.

‘Having been offered a place on this familiarisation trip with TransIndus back in February 2017, I had six months to eagerly await my visit. However in the final days just before departing, Myanmar hit the headlines for all the wrong reasons and I naturally had reservations about visiting at this particular time even though the areas I was to stay in were far removed from the troubled Rakhine State in the North West of the country.  From the moment I arrived however, I was made to feel welcome and after clearing immigration at Yangon Airport, I was faced with a wall of people wearing brightly coloured traditional dress and a beaming smile to match.

Yangon is a bustling city heavy with traffic, however unlike most other Asian cities there are no mopeds allowed! I started the morning with a walking tour through Chinatown and explored the busy markets selling fresh fruit, meat and flowers. The locals are incredibly friendly offering samples from their stalls to try. I carried on through the Indian quarter passing Hindu temples before finishing with a rickshaw ride to the historic Strand Hotel. 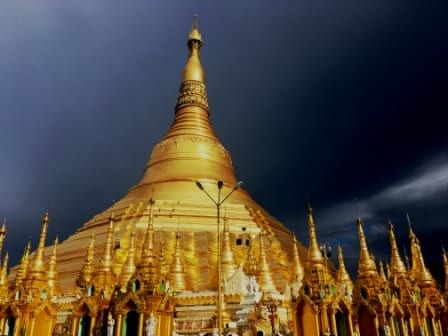 I ended the day with the undoubted highlight of Yangon,  the stunning Shwedagon Pagoda. The scale of this monument is immense covered in 60 tonnes of gold leaf and topped off with a stupa incrusted with 4531 diamonds; the largest of which is 72 carats!  Every day Monks scour the pagoda and collect the various jewels and diamonds that have fallen from the stupa! Watching the sunset and listening to prayers is a truly magical experience which really cannot be put into words.

It was an early start the next morning to catch a flight to Mandalay. The view from the plane gave me a glimpse of what to expect: gold, gold and more gold!

Mandalay is Myanmar’s second largest city, with the centre focused around the Royal Palace. Mandalay is chaotic with traffic. Add mopeds and bikes to the mix, and this makes crossing the road a challenge but it certainly adds to the fun. 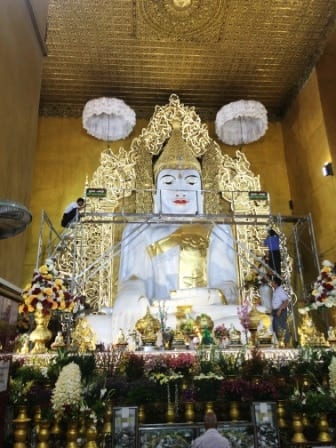 I passed some of the marble workshops, where hundreds of Buddha images are hand carved to perfection, these are then often exported to neighbouring Thailand or China. This was followed by a visit to Kyauktawgyi, famous for its seated Bhudda carved from a single block of marble.

Later that afternoon I visited the Golden Teak Monastery, built by King Mindon in the 19th Century. This intricately carved wooden monastery is an excellent example of teak craftsmanship.

The next day was action packed with visits to Sagaing and Inwa. Firstly a drive to Sagaing home to hundreds of stupas, monasteries, temples and nunneries.

My personal favourite visit was Sun U Ponya Shin Paya. Sat on the top of a 240 ft high hill, the pagoda offers outstanding  views of Sagaing and the river.  Later that afternoon I took the ferry across Irrawaddy River to visit Inwa. The mode of transport here is horse and cart, it is a welcome change to have views of the country side and see more of rural village life. 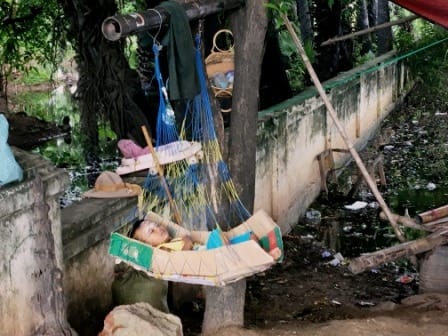 The end of the day was spent watching the sun set over the famous U-Bein Bridge. This is the world’s longest teak footbridge stretching over a kilometre in length.

The next day I travelled onwards to Bagan, a drive of around 5 hours. Bagan is like a magical undiscovered land, with mainly sandy dirt roads and temples everywhere you look!  My personal favourite was Dhammayangyi Temple built by the ruthless King Narathu who murdered his own father to claim the throne.  The temple brickwork is the finest in Bagan, as King Narathu oversaw the construction himself. Masons were executed if a needle could be pushed between bricks they laid! The temple is actually unfinished as he was assassinated before completion.

That evening was spent at Nanda Restaurant, eating delicious food and watching a puppet show.

The next morning I took a flight to Heho, the gateway to Inle Lake. The next stop was Pindaya Caves set deep in the hillsides.  The limestone caves contain over 8000 Buddha images, all of various shapes and sizes donated by various people since the caves became a place of worship in the 18th century. 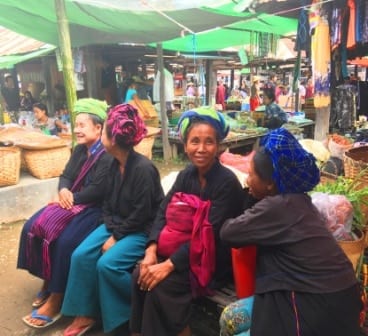 Inle lake is a very peaceful serene place to conclude any trip to Myanmar. There is much to do: explore the bustling markets, take a boat trip across the lake or watch the local fishermen. The floating gardens are incredible and show just how resourceful the local people are. 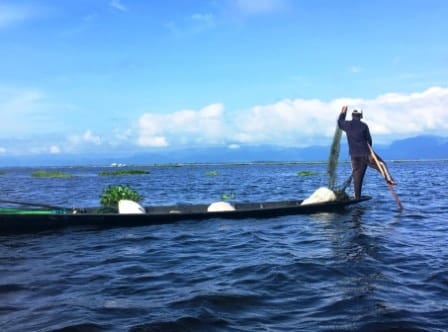 The people of Myanmar are gentle and have an authentic charm. There is still a sense of innocence in Myanmar, which I hope will remain and not become too westernised.’

If you are thinking of travelling to Myanmar but you are feeling cautious following the recent events in Rakhine State, please feel free to call Abbie and discuss any concerns you may have.