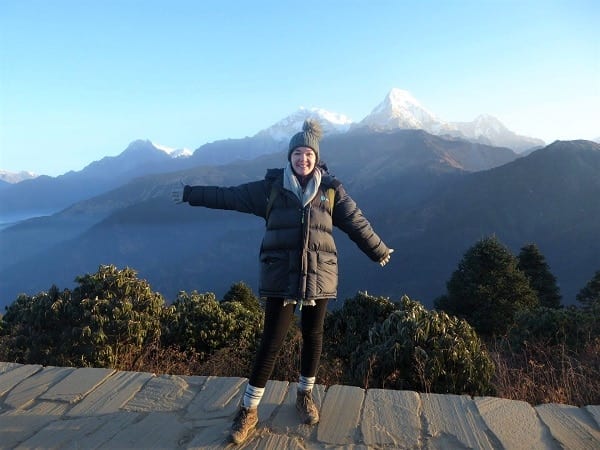 Abbie writes: ‘I have just returned from a whirlwind week in Nepal, where I was kindly hosted by Exodus. I am delighted to write about my experiences in this captivating country…

We began the journey from Heathrow flying via Delhi. After dinner and a nightcap, I slept well and woke to breakfast being served. This probably has something to do with being very kindly upgraded to business class by our friendly Jet Airways representative – a very civilised way to start the trip!

After a two hour stop in Delhi, the journey continued to Kathmandu. We arrived around 4pm, the visa process was quick and efficient and we were quickly on our way into the capital.  That evening we had dinner at our hotel ‘The Royal Singi’, located in the Thamel district where the bustling sights of Kathmandu are within easy reach.

The next morning we started bright and early, mainly to avoid the traffic and reach our destination in good time.

We arrived at the ‘River Fun rafting’ centre, where we were provided with the necessary gear, and given a safety demo. Before I knew it, we were tackling our first section of rapids on the Trishuli River, little did I know this was the tamest of what was to come. The rapids reached just below grade 4, which for a first timer was pretty scary. We had a fantastic guide who managed to keep us all inside the raft… the same can’t be said for the rest of our group in the other raft! 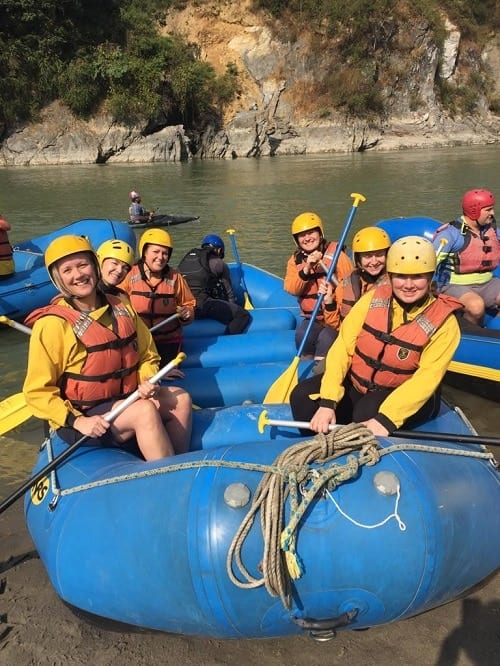 We carried on our journey by road to Bandipur, an elevated town with breathtaking views of the Himalayas. Here you can experience the traditional Newari culture and fantastic architecture. Walking through the pedestrianised stone streets felt like stepping back in time, as did the stay in our guest house that evening ‘The Old Inn’.

Sadly, the stay in Bandipur is short and sweet, we woke early to watch the sunrise before returning for breakfast and starting the next part of our journey to Pokhara.

The drive from Bandipur to Pokhara is around three hours, the roads are bumpy… very bumpy … however the scenery more than made up for this.  On arrival in Pokhara we headed to the Tibetan refugee camp. Established in the 1960’s the camp offers a safe place of refuge for displaced Tibetan people, following the Chinese invasion of Tibet. Here we were taught how to make Tibetan Momos, the easy part was chopping the veggies and mixing the dough … pleating the dumplings was definitely best left to the experts. 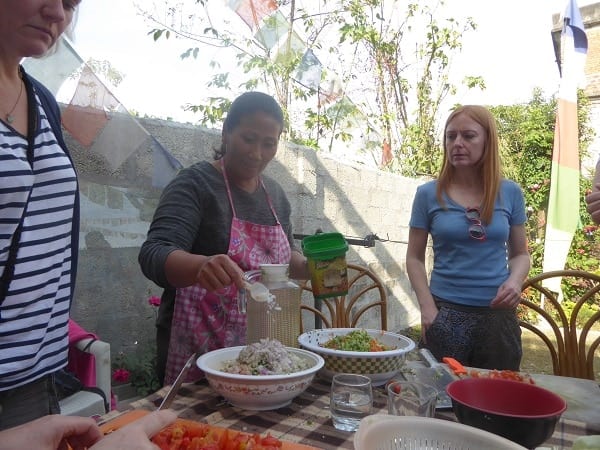 The early evening was free to explore the beautiful lakeside city of Pokhara. With numerous shops selling different handicrafts including Nepali cashmere, lakeside activities such as bike and boat hire, and plenty of restaurants offering the most wonderful food… a few hours of wandering really whetted my appetite! 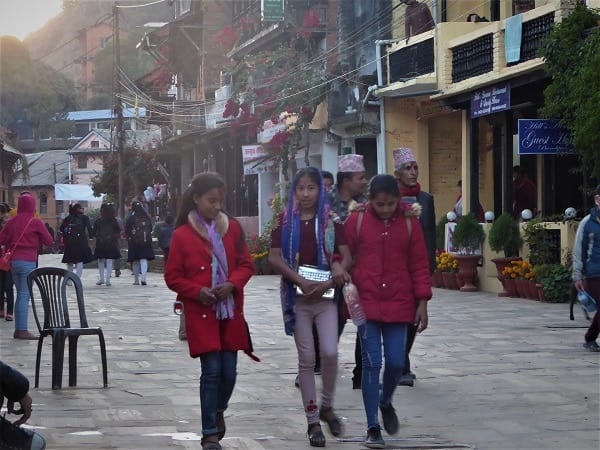 The next morning was the start of our 3-day trek, the ultimate aim being to watch the sunrise or sunset at Poon Hill. We embarked on a 2-hour drive from Pokhara to Nayapul, which was the start point for our trek. We began our walk through the busy village where children were making their way to school and locals stopping at the various shops. We walked for around 3 ½ hours to our lunch stop, the morning’s walk was fairly gentle, but the same couldn’t be said for the afternoon when we steadfastly ascended 3000 or so stone steps to reach our guest house in Banthanti. We were welcomed in the usual Nepalese way with a warm cup of tea and incredible views down through the valley. 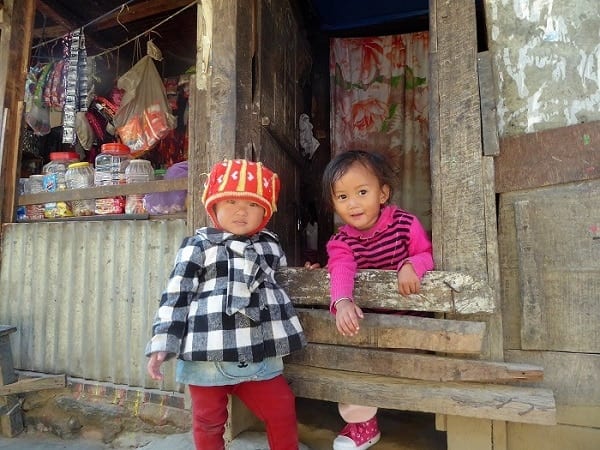 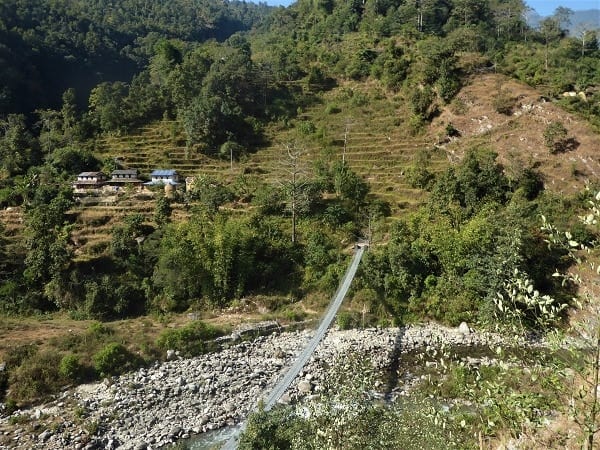 The tea houses are basic but comfortable, and frankly after all the walking you fall into bed pretty much straight after dinner. The evenings are cold this time of year, so sleeping bag and down jacket are essential to keep warm at night. The main dining room has a central fire to keep warm but the rest of building is not heated. It costs 100 rupees (about 75p) for a solar-powered hot shower which is well worth it after working up quite a sweat on the walk.

After being woken with a cup of tea in bed the next morning, we began the onward trek to Ghorepani. This walk was very pleasant passing through lush forest areas, meeting farmers and their livestock along the way.  We reached our destination by lunch time but we were greeted by a total ‘white out’… this was slightly worrying as we had planned to watch sunset that evening. We explored the small village centre and made use of the free time to buy various handicrafts. Unfortunately, the weather didn’t shift and we all said a small prayer that the sky would be clear by morning so we could enjoy the sunrise. 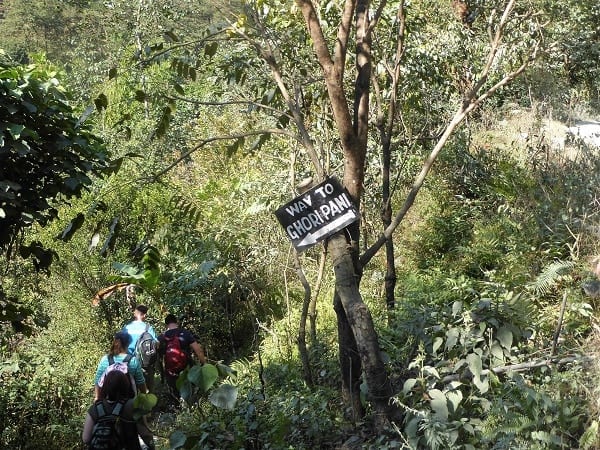 Following a 4:45am wakeup call and with head torch and duvet jacket on, we began the walk-up Poon Hill still not knowing if the cloud had shifted. After walking for around 45 minutes and getting nearer the top we could slowly start to see the mountain peaks taking shape in the dull light.  We all breathed a sigh of relief and it gave us a final push to reach the top. We arrived just before the sun started to rise and the views were breath-taking. It was totally worth the 3000 steps! 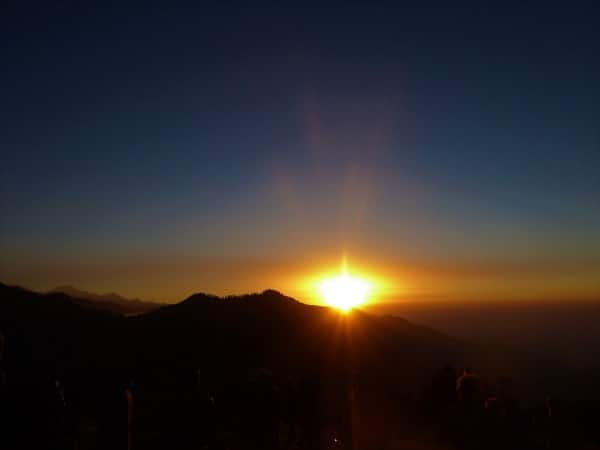 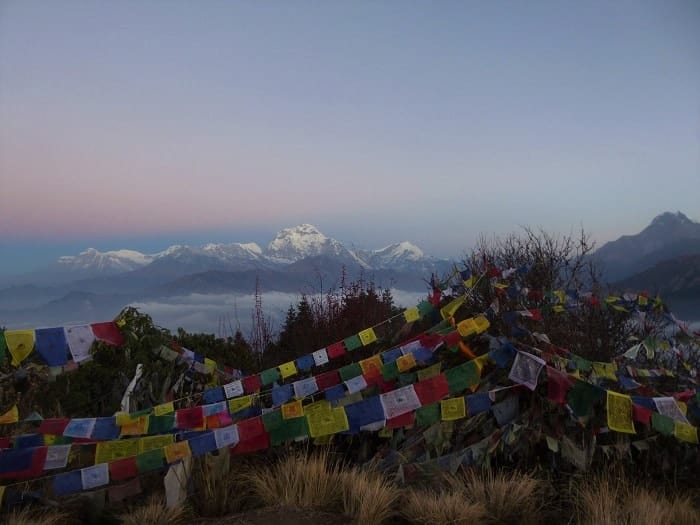 After gulping in the fresh air, staring at the glorious mountain peaks and watching the sun rise, we began the descent back down for some much-needed breakfast.

We packed our bags one final time before starting the long trek back to our original starting point of Nayapul. We reached our destination by around 4.00pm and celebrated with a quick beer before travelling by road back to Pokhara.

The next morning, we headed to Pokhara airport for our flight back to Kathmandu which afforded amazing views of the Himalayas. We arrived by lunch and headed straight to the School in Kathmandu where Exodus have a fantastic project called ‘Freedom Kit Bag’.

The kit bags are given to certain year groups at the school, along with a lesson for girls (and also importantly attended by boys) on the subject of menstruation. Many women in Nepal still have to deal with stigma when they menstruate, as well as suffering various infections  from not having proper sanitary protection.  Freedom Kit Bags are a reusable sanitary product and even come complete with a washing line and pegs. The kit bags are environmentally friendly as they are reusable and last up to 2 years. 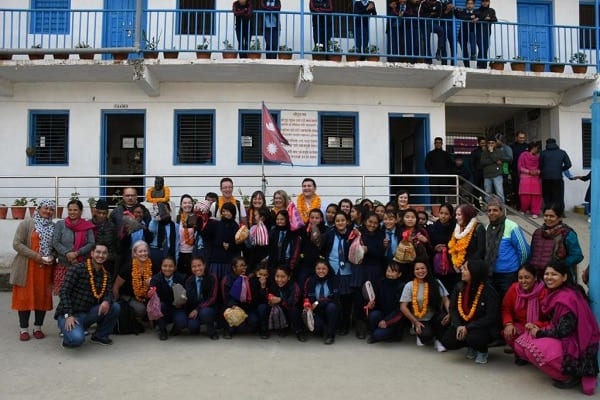 We had a couple of hours in Kathmandu for sightseeing and took in a whistle-stop tour of the main sights of Durbar Square. We timed our visit to Kumari-ghar perfectly and we were lucky enough to see Kumari make an appearance. Built in 1757 by King Jaya Prakash Malla, Kumari-ghar is the home to the living goddess (Kumari) who is considered to be an incarnation of the goddess Taleju. The current Kumari is just 4 years old.  After fulfilling the requirements she was chosen and will remain until she reaches puberty and then the next Kumari will be chosen. A quick walking tour takes in various temples, all of which are intricately crafted from wood and being restored following the earthquake. We finish with a visit to the museum dedicated to the 2015 earthquake. The pictures and artefacts really highlight how much the city suffered.

Our final evening in Kathmandu was one to remember, we had dinner at the extremely well-appointed Dwarika’s Hotel where we were treated to a delightful 6-course banquet and even got to sample the local Raksi.

Sadly my time in Nepal had come to an end, but my short stay has made me crave to see more of this wonderful country and its ever-smiling and joyful people.’

Please speak with Abbie about arranging a tour or tailor-made journey in Nepal.  Camilla and Rob also know Nepal well  and can advise on both walking and sightseeing-based itineraries.