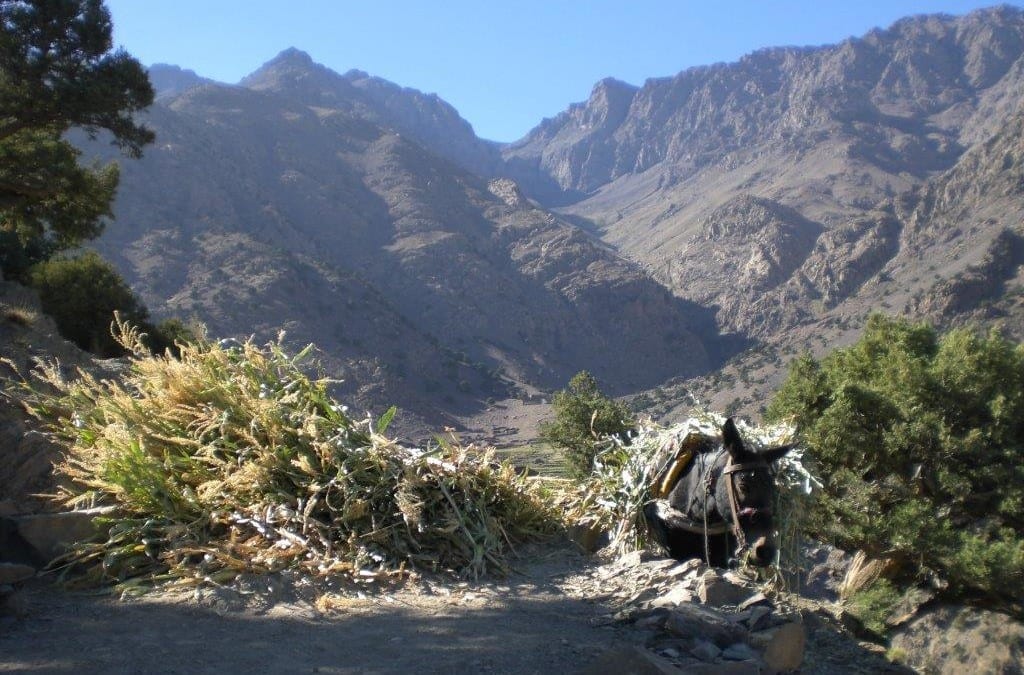 Geordie Taylor reports on his return from the Atlas Mountains where the ‘wrong valley’ turned into the ‘right move’ … read on:

The intention was to hit the heights of Mount Toubkal (4200m), the highest mountain in North Africa. The reality was very, very different.

I arrived at the village of Imlil (1700m) in the foothills, the start point for the trek, at about 9am. The taxi driver said “get a guide”. I said “No, I want to do it myself” He laughed as he drove off. I put on my backpack (10kg) and set off due west up and up the valley. Unfortunately, I should have been going due south! Now those who know me and my navigational skills would say I was unfortunate, I was expecting the valley to turn south-ish – it just didn’t. Two hours later I’m at the top of the wrong valley (2500m), conversing with a child in sign language as he is trying to fleece my over a Coke. I wasn’t lost, I just wasn’t where I wanted to be. With frenzied gesticulation, he suggested I go do down there (south) then round that (a big mountain) then up a valley round the corner (east) to get back on track. 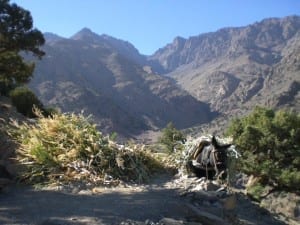 Off I set, all downhill. Two hours later I bumped into another stall (2000m) selling soft drink. As before not a word of common language. He sat me down, offered me tea and we exchanged smokes. I got my map out and pointed where I wanted to be. He laughed, looked at my legs and laughed again. Then, totally out the blue, he shut his stall, grabbed my bag and headed off up the valley, me tagging behind, generally pleased that I’d somehow conveyed my wishes to him. I now had an unintentional guide and the dreaded subject of fees had not been discussed.

We stopped by a sheep-herder mate of his sat by a waterfall and we had mint tea, just divine by the way. Then off again, up steep shale, shingle, scree and occasional path, up to a refuge (3000m). By now, for those technical trekkers amongst you, I was blowin’ out my ass! Even at this height the temperature was in the 30s, I had supped 4 litres of water without a pee, sweat was dripping from my hat and I was rapidly coming to the conclusion that my goal of peaking Toubkal was now a lost cause. By now I should have been in the 200-berth refuge below the summit of Toubkal, exchanging trekking stories with like-minded folk ready for the final ascent tomorrow. Instead I was on my billy, up the wrong valley, with a guide I never intended, miles & hours off my planned route, my goal in tatters, standing outside a crappy 4-berth refuge, which was locked!

There was an up-side though – the views were out of this world. Sat by the refuge was a weather-worn goat-herder mate of his and we had more tea, smokes and time to think. I said I’d be happy to sleep in the refuge if we could get it open, so we decided to break in. All doors & windows were metal-shuttered and no amount of banging & clattering would open them, not ever the small one 12-foot up with my man standing on my shoulders. I then said I’d be happy to sleep outside and walk back to Imlil in the morning. This entire exchange is being done in sign-language and drawings in the dust. Altitude, exhaustion and dehydration can play tricks on the mind but it appears that I was the only one of the three us suffering from it. His facial-expression and body-language effectively said “Stop being an idiot, come with me back to my village, I’ll give you a hot meal and a bed for the night”. Two senses kicked in – one common, and one survival, so I agreed.

Back we trekked, way, way down the valley to his village, stopping many times to greet friends of his, and each time after his initial introduction and shaking of hands, they always smiled at me – I can only guess as to what they were thinking.

Two hours later we arrived at his village (1700m), best described as 50 concrete habitats nailed to the side of a mountain. The “streets” were a yard wide, meandering from top to bottom. The “traffic” was mules, cows & goats going about their business. The usual sequence was two withered, wrinkled women leading from the front, bent double carrying bales of corn the size of a fridge-freezer, followed by a mule carrying goods the size of a shed, followed by a bloke on his mobile phone with a stick to beat the mule, followed by some goats and half-dressed children. My man, who now had a name, Ahmed, showed me to my “hotel”, a 2-storey Gite made from concrete blocks. 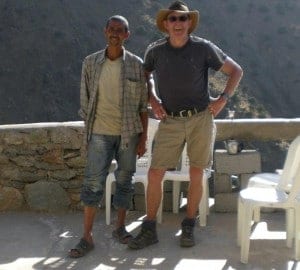 The ground floor had all the facilities you’d expect of a Gite in the alpine ski resorts (kitchen, bathroom, lounge, etc.) and the first floor was a terrace open to the elements. It was basic but clean and tidy. The terrace overlooked the entire valley. As we were sitting having more tea, the Muslim call to prayer started at the village further down the valley. That sound, as the call echoed 3 miles up and back down the valley will stay with me forever.

On the terrace, I decided it was time we came to the grubby subject of payment. The taxi driver had said that a usual guide would cost in the region of 100 Euros for two days, and he’d expect a tip at the end, regardless. I had very little Moroccan currency but loads of Euros, commonly accepted everywhere in this region. I explained with pen and paper to Ahmed how much a Euro was worth in Imlil, though I don’t think he’d ever seen one before. I shelled out 50 Euros, explaining it was a thank you for coming to my aid and for his hospitality. Based on the cost of a bottle of Coke at his shop and the volume of passing trade, I reckon that was equivalent to two weeks wages for him. He took it very sheepishly, perhaps even with a slightly embarrassed expression. Next thing I know, he’s shouting at the top of his voice off the terrace to anyone within earshot that this pale-faced trekker has just given him 50 Euros. This is quickly followed by me being paraded by Ahmed through the village to meet the elders, have tea here, have smokes there, and generally being treated like a King. Most folk I met said (in broken French) that he was a top man for helping me and that I was a top man for paying him so well. All the time, I’m thinking “Darnit, 30 Euros would have done it, eh”.

Dinner was served by Mrs Ahmed and their 6 kids on the terrace. Two huge bowls of chicken, couscous, potatoes, tomatoes, peppers, two slabs of bread and yet more mint tea. As darkness fell, the heavens revealed their stars and the Milky Way in all its majesty. I stood in awe of everything around me – the setting, the sky, and most importantly, the kindness and unexpected hospitality shown to me. A mattress and pillow were provided and I hunkered into my sleeping bag to sleep on the terrace under the stars – quite simply, a brilliant day.

Next morning I was woken at 8am by a snotty-nosed son number-4, breakfast & tea already waiting. Ahmed took my bag and we set off back to his stall. We said our goodbyes and I (successfully this time) navigated myself back to my waiting taxi at Imlil around mid-day. I’d planned to ascend 2500m from Imlil to the summit of Toubkal over 2 days. Instead I upped & downed the equivalent of 2600m in just over 1 day – the equivalent of Ben Nevis, twice. All in all, a spectacular error or judgement turned in to the best adventure I can remember, and probably the best mistake I will ever make!