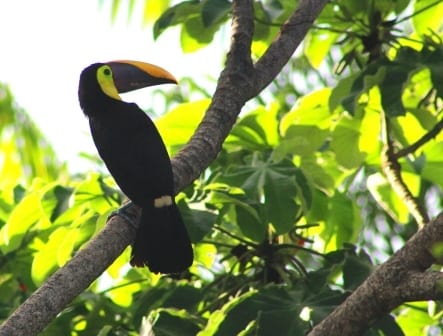 Camilla captures here her action-packed, often soaking-wet, wildlife-filled trip to Costa Rica where she and a group of UK travel consultants were kindly hosted by our friends at Distinctive America.

Our 11 hour flight with British Airways on the recently-introduced direct service from Gatwick to San Jose went pretty quickly probably due to the excitement for what lay ahead.  We quickly transferred to our hotel – the Grano de Oro – which was the perfect setting for our first night of the trip. The name of the hotel means the golden grain, referring to Costa Rica’s number one export, coffee. We could all have done with a strong caffeine hit as the jet lag set in and we fought our way through our fabulous first meal.

Refreshed after a good night sleep we made an early start the next morning to get on the road to the Pacuare River where we would embark upon our first adventure. Once we were geared up and had our safety briefing we were ready to set off on our rafting transfer to Pacuare Lodge. The one hour journey through grade 2 rapids certainly got the adrenalin pumping, but was really just preparing us for what was to come the following day. We all arrived safely and soaking wet at the lodge ready for our lunch of rice, beans and chicken. 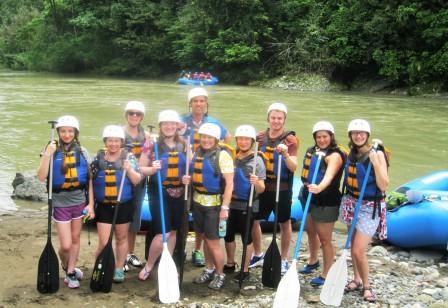 After lunch there was a choice of activities to keep us entertained, along with most of the group I chose to go canyoneering, in spite of the downpour that ensued. We soon came to realise being sopping wet was a state we would become accustomed to over the next 48 hours! So, we harnessed up and off we went into the jungle to Tarzan swing, climb and rappel through the canopy and down waterfalls for the afternoon. It was brilliant!  After such a full on day a cocktail in our private plunge pool on the balcony of our room overlooking the river seemed the only appropriate thing to do!  The small amount of electricity required to run the lodge is generated by their own hydro power station. To save on power our room was candle lit on our return from dinner.

Waking up to the sounds of the jungle we had the option to go bird watching at dawn. We saw many species of birds, butterflies and reptiles around the property and even a poisonous ‘blue jeans dart frog’. Although it was way up in the tree tops we were lucky enough to have our first glimpse of a three-toed sloth. 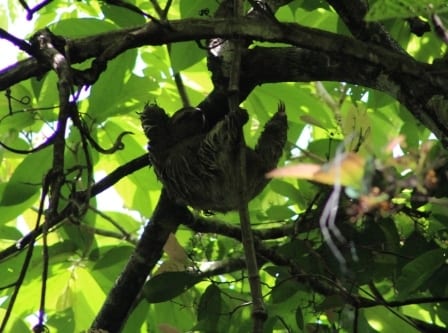 A hearty breakfast set us up for our second white-water rafting transfer to Siquirres. The journey was incredible, we encountered grade 4+ rapids, jumped out of the raft and floated through gorges passing the homes of the indigenous people en route and enjoyed a picnic lunch on the bank of the river.

Barely out of our sodden clothes it was time to get wet again, admittedly it was a little more relaxing to be bathing in natural hot springs and with a complex of over 28 pools to explore the Shangri La Gardens it was a welcome change of scene!

Another early start allowed us to beat the crowds for our zip-wiring excursion in the forest canopy. After a short ride on the ‘Sky Tram’ we were in the treetops overlooking Arenal Volcano. A series of seven zip-lines zigzagged us just above and on one occasion through the canopy, the longest of which was an incredible 800m. 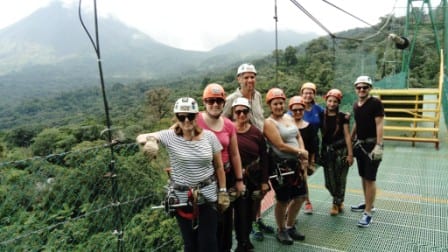 After 2 hours the thrills were over, I could have gone round again, but we had to catch our transfer to Manual Antonio. We were slowed down a little by a huge thunder storm which lasted most of the journey, but eventually we arrived after dark.

In the morning while it was still a little cooler we entered Manuel Antonio National Park. No sooner in the gates than we saw another three-toed sloth high up amongst the leaves.  As we got deeper into the park we were lucky enough to see another sloth as well as two of the four species of monkey that inhabit Costa Rica, raccoons, bats, land crabs, iguanas, an  agouti and several species of bird and lizard. 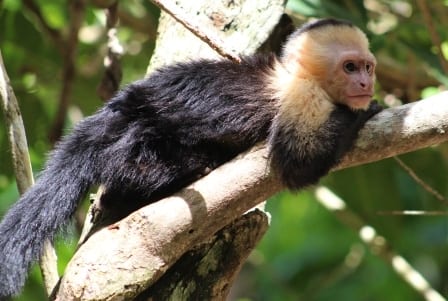 As the day had heated up we could not resist the call of the golden sandy beaches and their clear blue waters. The ocean was a little rougher than anticipated and not everyone managed to hold onto their swimsuits and sunglasses! The capuchin monkeys were out in force and we were able to get pretty close to some very playful friends. With an afternoon to relax, even at our property there was plenty of wildlife to be spotted. There was something around every corner, Iguanas sun bathing, hummingbirds sipping nectar and even a cheeky raccoon wanting to join us for dinner.

The next morning we transferred to our final destination further south on the Osa Peninsular.  The ocean views from our balcony were truly stunning and this really was the place to get up close with local wildlife. The iguana that was sat in the tree in front of my room didn’t move for two days, he could still be there now! 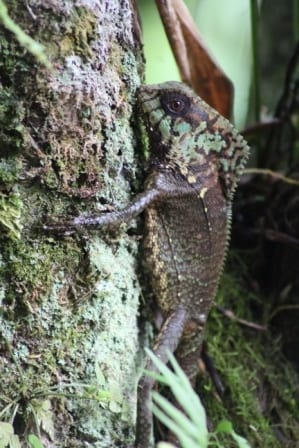 Sitting by the pool we had visits from toucans, scarlet macaws and an inquisitive white nosed coati. After dark we went on a walk through the jungle to see what we could spot. There were plenty of spiders and creepy crawlies watching us from the trees, snakes clung to the spindly branches above our heads and if you were quick enough you could catch a glimpse of a tarantula. We could hear the croak of the red eyed leaf frog, but the frogs themselves were eluding us. Finally at one of the ponds belonging to the property we were lucky enough to see a female, followed by a mating pair. My evening was topped off nicely by a bold little armadillo rustling in the foliage on the way back to my room. 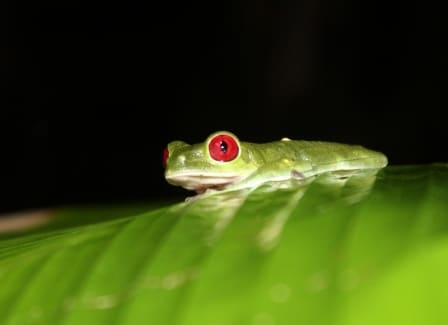 I woke up to an uninvited guest in my bed the next morning, a cricket had found a nice safe spot on the inside of my mosquito net and had been there most of the night, this had been spotted by a much larger and less friendly looking spider who had taken the opportunity to devour the unfortunate cricket there and then not two feet from my head. Needless to say I did not have a lie in and instead went on the early-bird wildlife watching tour.  We did not have to venture far to see howler, spider and squirrel monkeys as well as a vast array of birds and butterflies. 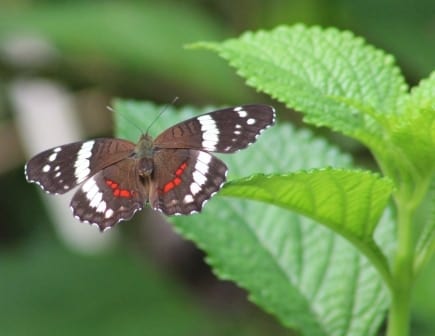 After a quick breakfast I was back out into the forest on a 3 hour hike to see what else we could spot. I think many creatures were hiding from the torrential rain, but there was a group of howler monkeys who seemed to be following us from above and we managed to avoid a black and green dart frog at our feet as we were guided through the tropical flora and fauna.

After spending my final morning observing toucans delicately plucking berries from a bush on one side of my room and a family of howler monkeys passing through the trees overhead on the other side of my room I was very reluctant to make my final check out. The boat transfer to Golfito and the light aircraft flight back to San Jose were the perfect way to say good bye to the Osa Peninsular, which had been a real highlight of my trip.

If you are interested in planning a journey in Costa Rica, speak with me and I’ll be delighted to discuss the various options.  – Camilla