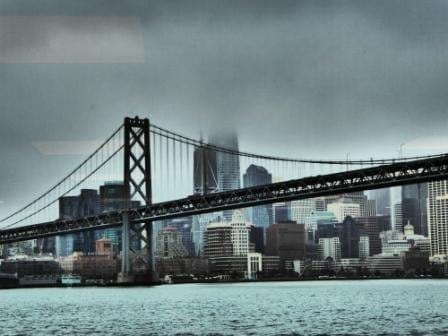 Two weeks in northern California was never going to be enough time to do justice to this remarkable region of the USA but in August, Rob and his family endeavoured to cover as much ground as possible …

‘The first thing to remember when visiting San Francisco in August is – paradoxically – to wrap up warm and wear a coat.  Despite temperatures of 30 degrees-plus just a few miles inland, the Bay area commonly suffers from sea mists blowing in from the Pacific during the summer months and our time roaming the city’s famously hilly streets was spent togged up in our cagoules and frequently ducking into coffee-houses for hot drinks.

We had arrived the evening before on a British Airways flight from Heathrow and had driven excitedly over the impressive span of the Bay Bridge to Oakland where we had a waterfront hotel right next to the terminal for the San Francisco ferry.  So, that morning – after a pancake bonanza breakfast – we left the car happily parked up at the hotel and walked just a few yards to catch one of the regular boats across the water to the City Docks.  From here it was only a 10 minute walk to Chinatown and the start of our self-guided, still jet-lagged and decidedly chilly walking tour of the main sights. 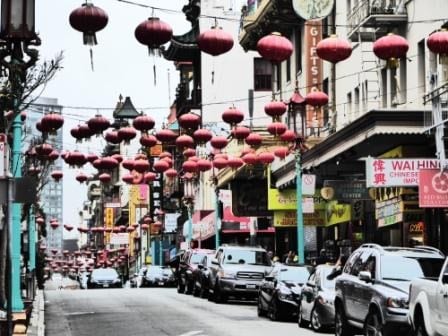 San Francisco is one of the most singularly distinctive cities I’ve ever visited.  Steve McQueen’s famous car chase in ‘Bullitt’ immediately came to mind as we traversed the steep city streets dodging trams as we went.  The pagoda-topped Chinatown festooned with bright red lanterns was a delightful interlude of Asian culture and as we wandered we literally stumbled upon ‘Jack Kerouac’s Alley’ where literary giants such as John Steinbeck have their words immortalized in the paving stones. 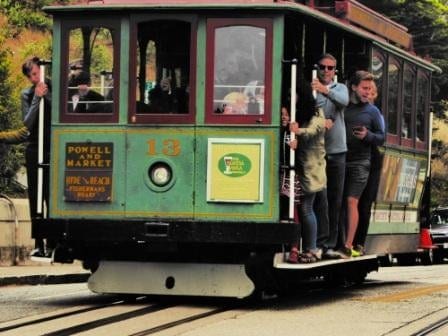 We spent time in the proudly revolutionary ‘City Lights Bookstore’ and the nearby ‘Beat Museum’ which pays homage to the colourful characters of the ‘50s and ‘60s’ Beat Generation in the suitably haphazard setting of an old theatre building.

Via another warming hot chocolate we arrived at Fisherman’s Wharf and enjoyed a stroll around Pier 39, the city’s unashamedly popular tourist haunt where you get your first close up sighting of both Alcatraz and the Golden Gate Bridge, whilst an enormous home-grown colony of sea lions provide a backing track of boisterous barking.

An ascent of the preposterous zigzags of Lombard Street and a return over the heights of Nob Hill followed as we made our way back to the ferry.  There was so much more we wanted to see but jetlag was beginning to win the wrestling match between wishlists and reality.   That evening as we enjoyed  cheeseburger and fries in a bar back in Oakland we reflected that 24 hours into our trip we had definitely arrived in America!

The next morning we drove east and immediately hit the mid 30’s temperatures we had missed the previous day.  Luckily we continued to enjoy perfect sunny weather for the rest of the trip.  Our objective was Yosemite and en route we stocked up on camping provisions and looked for places to cool off in some of the rivers that flow down from the Sierra Nevada.  We found one magical spot called Rainbow Pools where we all enjoyed a refreshing swim and Joe braved a big jump off one of the cliffs into the icy waters. 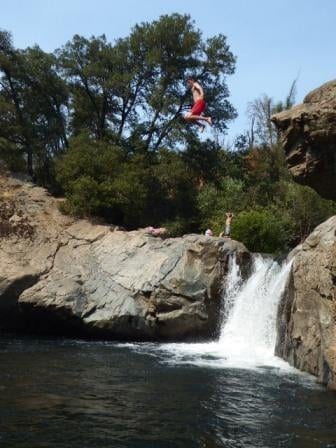 Yosemite National Park is a 4 hour drive from San Francisco and we were booked for the next 3 days into a camp-site in a pine forest about 20 minutes from the ‘Valley’ which is at the heart of the National Park.   For years I had dreamed of seeing the splendours of Yosemite and so it was with great anticipation the next morning that we drove into the jaws of the Valley and ascended up to Glacier Point where we got our first views across the mountains.  It was beyond even my own fevered expectations.  Half Dome was at eye level and dominated the skyline with its instantly recognisable shape whilst the Merced River winded through a preposterously beautiful landscape of tumbling waterfalls, green meadows and monolithic peaks. 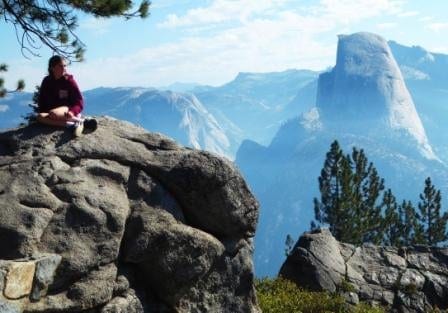 We trekked down to the Valley below having a picnic en route and then enjoyed floating down the river through the meadows sitting upon huge inflated inner-tubes – great fun!  That evening we drove out of the valley as the sun dipped low and the giant rock-faces were bathed in soft, golden light.  Days like this are never forgotten. 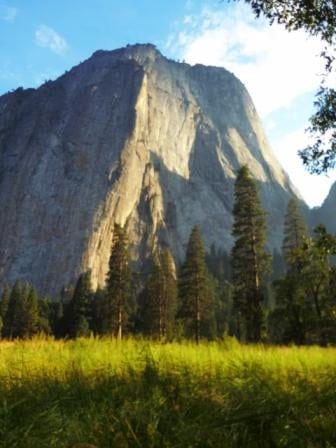 Our explorations in Yosemite continued over the next few days with a visit to Tuolumne Grove to see the magnificent redwoods there and the epic drive up past Tenaya Lake through the ‘Meadows’ along the Tioga Road before we crossed the 10,000 ft pass that gains entry to the Sierra Nevada.  It was sad to be saying goodbye to Yosemite but we needed to push on and our next stop was the surreal moonscape surrounding Mono Lake – once described by Mark Twain as America’s ‘Dead Sea’ so salty are its waters.  Here we swam amongst the limestone tufa surrounded by snow-capped peaks of up to 14,000 ft. 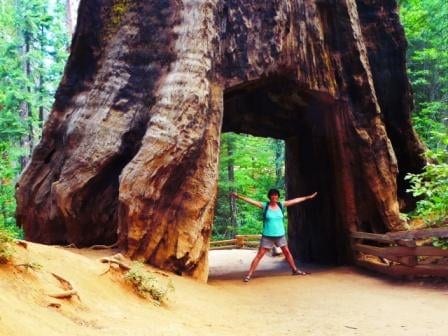 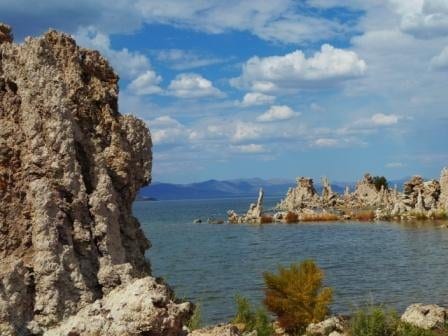 We stayed a night at an old staging-post that had been passed down through eight generations of the same family and the following day visited Bodie a deserted gold-mining camp set high in the windswept hills.  Here we were amazed to find a whole community of wooden cabins still containing their owners’ abandoned possessions from time past.   There was a chapel, post office, bank, school (where even the desks remained) and bar-room (complete with billiard table and cue-stand) where – except for a thick layer of dust – you could imagine a scene from the 1880’s unfolding before your very eyes.   Rosa (aged 11) was transfixed and especially enjoyed relating the rather vivid story of a murder whilst standing at the very scene of the crime. 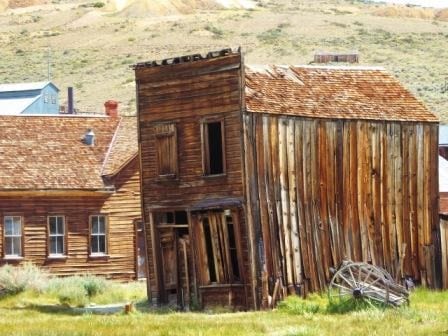 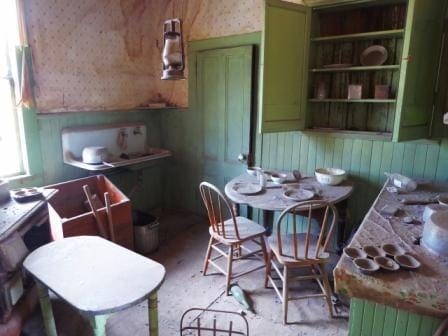 Onward we travelled, now heading north and passing momentarily into the state of Nevada (immediate profusion of casinos) before arriving at Lake Tahoe where we enjoyed some beach time on the sandy shores.   Tahoe is cradled by steeply-sloped hills and is a major winter sports resort for most of the year. Right now at the height of summer, we joined the many American families splashing happily in the fresh-water and enjoying the sizzling temperatures. 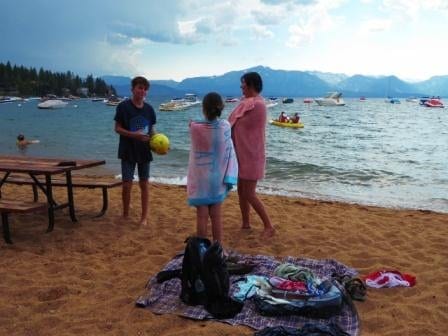 Our next stop had been long-awaited… we had arranged a white-water raft journey down the rapids of the South Fork of the American River.  In the capable hands of Kiki – our rafting guide from our kind hosts ‘All Outdoors’ – we were briefed on the ins and outs (the latter naturally concerning us most) of rafting before we took to the river.  Rosa confessed to being very nervous but it was only the following day that she explained she had thought until she saw our inflatable raft at the riverside that we would be making our own raft from bits of wood and lengths of rope!

The trip began quietly with a gentle drift through stunning scenery before we tackled a couple of Grade II rapids to learn our paddling techniques and to get our pulses racing a little.  We were able to swim and float downstream alongside the raft a few times and pretend that this was all there was to it.

Then we entered ‘The Gorge’ and things livened up!  We bounded and bounced our way down a succession of Grade III rapids for the final hour of the ride – yes there were a few screams and not all by the kids either!  It was immense fun and Kiki – our nerveless captain steering with aplomb at the rear – created just the right atmosphere of excitement, dread and exhilaration. 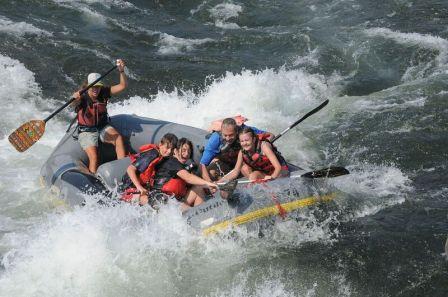 We emerged unscathed at the end of the final tumbling rapid and were still smiling hours later that evening over our celebratory pizzas.   California is a superb location for rafting and the American River we rafted along has a good variety of grades for novices like us and committed white-water adrenalin-junkies too.    Depending on snow-melt and seasonality the river conditions vary throughout the year. For families, the South Fork section we undertook is a perfect introduction to the sport and we chose All Outdoors as they have over 50 years of experience in running their operations.

Our final stop was the hip counterculture town of Santa Cruz on the Pacific coast, an hour or so south from San Francisco.  Here we rounded off our trip enjoying the beautiful sandy beaches and in particular a fun-packed evening on the bone-jolting rides at the famous Board Walk amusement park.Here the famous ‘Giant Dipper’ – a 1924-constructed wooden roller coaster affords the foolish an opportunity to scare them (our) selves witless. 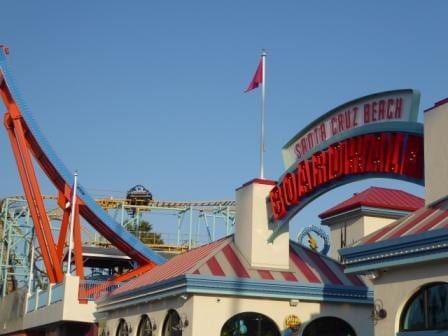 As a family-friendly destination it would be hard to beat northern California.  In addition to what we managed to see and do there is so much more – mountain-biking in Marin county, visiting the magnificent aquarium in Monterey, getting a glimpse of the old ‘Wild West’ in Columbia State Historic Park, panning for gold in the tumbling rivers and craning necks to look up at the world’s tallest trees in Muir Woods – the possibilities are endless.   If you wish to discuss a trip with me I’d be delighted to share a few ideas and make suggestions.  – Rob

[Flights were with British Airways direct from Heathrow and accommodation was researched via various trade websites. Many thanks to Diana and Kiki at All Outdoors for the rafting adventure – www.aorafting.com ]