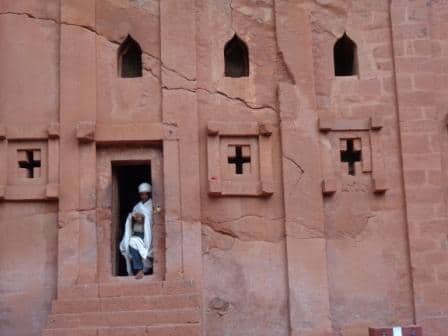 Rob has just returned from a whirlwind week in Ethiopia where he travelled courtesy of Exodus and in the company of 7 other travel trade colleagues on a fact-finding mission.  With limited time but with the aid of 3 internal flights to get between the key locations the trip hit the ground running and kept up the pace throughout.

‘We landed in Addis Ababa after our overnight flight and checked into our hotel where a very colourful and joyful wedding party was in full swing giving us a great introduction to Ethiopian pageantry!  After some lunch  we visited the Holy Trinity Cathedral, resting place of Emperor Haile Selassie and also interestingly, the British suffragette Sylvia Pankhurst. We also visit to the National Museum to see ‘Lucy’ –the skeleton of our earliest known relative at 3.2m years old, found in 1974 in Ethiopia’s Awash Valley. The nation are extremely proud of this hugely important anthropological discovery. 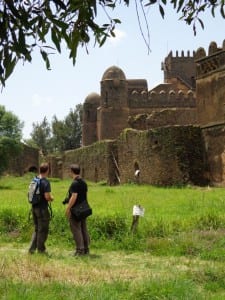 The next morning we were up early to fly from Addis to Gondar in the northern highlands.  Far below us the hillsides were green and verdant – it was the end of the rainy season and the rivers that make up the headwaters of the Blue Nile were running strongly.

Gondar is described as the ‘Camelot of Africa’ as it has a fascinating history of power struggles and frequent assassinations as the one time seat of the Royal family. The splendidly atmospheric castles here are a World Heritage Site and date back to the 1600s and the reign of Emperor Fasiladas.  Also of unique importance is the wonderful Debran Berhan Selassie Church which is one of only a few of the earliest Christian churches that survived regular invasions from Sudanese zealots.  The ceiling of the church is famous for its many angel faces with eyes looking in every direction and it’s walls are a blaze of colour as the murals depict scenes from the Old and New Testament.

Early the following morning we made the 3 hour drive into the Simien Mountains.  The first rays of sunshine lit the steep escarpment and towering volcanic ‘table tops’ and all the while we passed smiling local people herding their goats and driving along their mules loaded with firewood.  We walked for 3 hours along the lip of one of the huge sweeping hillsides enjoying the majestic views. 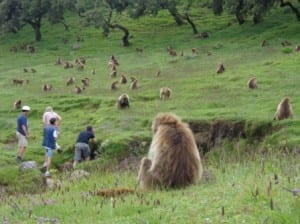 We also came upon a troop of gelada baboons for which these mountains are famous.  Unusually these baboons graze upon vegetation rather than as tree-dwellers and are quite content for you to approach to within a few metres.  Their hubbub of constant chatter was a reminder that they are one of our closest primate relations. 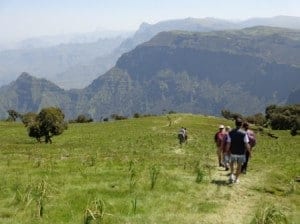 On the way back to Gondar we passed the spectacular Lama River waterfalls, an astonishingly beautiful scene with the gorge garlanded with a profusion of vivid yellow Yadey Abeba flowers. 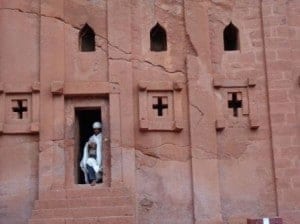 Our second internal flight took us to Lalibela which ranks with Petra as one of the most impressive sites in the world for the art of rock-carving.  The degree of religious devotion that inspired the creation of the monolithic churches cut from the granite bedrock of the hill upon which the town stands is quite simply breathtaking.  Inside we met the resident priests and peer into the dark pillared recesses to look at the various Christian murals and icons. 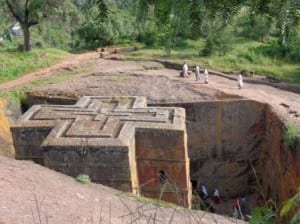 The labyrinth of passageways and tunnels that connect the various sites make for very enjoyable explorations.  We finished our wanderings at the most remarkable of all the churches – the Cross of St George – and we can only marvel at the sheer effort and dedication that was involved in its formation. 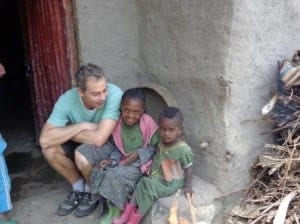 The next day we set off at sunrise to trek high above Lalibela to one final rock church cut into the cliff overlooking the town.  The church was another architectural gem and the views from the hilltop were panoramic.  Myself and a couple of the others decided to continue trekking onwards around the far side of the mountain. Along the trail we befriended a local priest who kindly invited us into his home where we enjoyed a fascinating glimpse of domestic life as his wife and 4 daughters (aged 1 to 8 years) prepared a simple meal for us.  This was a very special interlude to our 8 hour hike and we returned to Lalibela with great memories of the day. 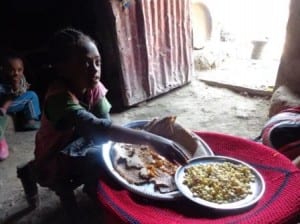 Our trip ended with a flight back to Addis and an uproarious evening of traditional dancing before the 0100hrs flight departure back home.   It was such a brief visit but I shall definitely return one day to see more – there was so much we managed to do but also much else to enjoy too.  My abiding impressions are of a joyful nation of smiling and warm-spirited people living in a green and beautiful land.