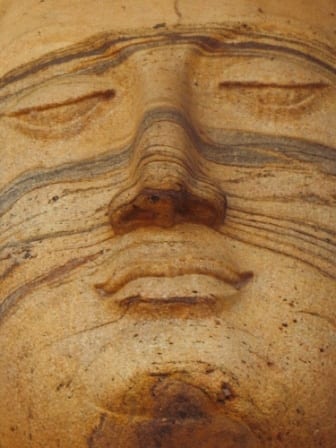 Rob and his family visited Sri Lanka over the Easter period and enjoyed heatwave temperatures whilst travelling along the south and recently re-opened north-east coast before heading inland to explore the cultural splendours of Polunnaruwa and Sigirya.

Rob writes:  ‘The direct flight with Sri Lankan Airlines was very smooth and we arrived into Colombo relatively fresh for the road transfer to Mirissa at the island’s southernmost tip.  The post-tsunami and newly-built ‘Expressway’ has shortened this journey to just over two  hours – the last time I travelled this way in 2003 it took more than six!   The south-coast beaches are of course outstanding and Joe (12) and Rosa (10) enjoyed getting bounced around in the pounding waves but we were here also to see blue whales and we managed to catch a couple of sightings of these magnificent creatures during a morning’s boat ride into their migration zone about 20 miles offshore.  There were plenty of dolphins and flying-fish too but the sight of blue whales breaching the surface will live long in the memory! 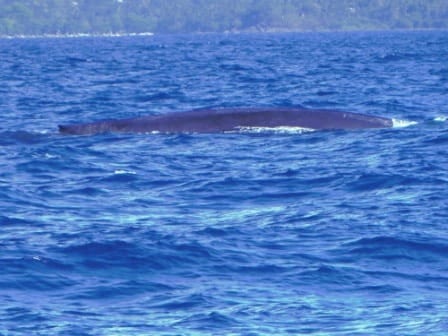 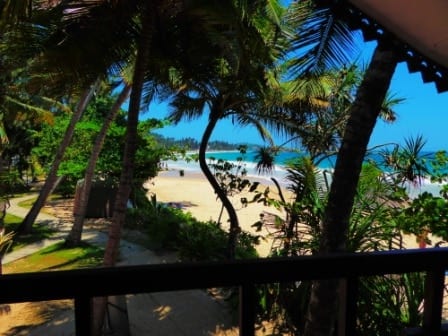 After 3 days relaxation we headed inland and eastwards to Kataragama which is Sri Lanka’s most holy pilgrimage site and we witnessed the evening ‘Puja’ at the Hindu temple where devotees hold burning coconuts in homage to their gods.

Kataragama is also a convenient access point to Yala National Park and we had great fun during our afternoon game-drive spotting the wide variety of animals and birds that can be found in this beautiful reserve of forests and wetland lagoons.   We weren’t lucky enough to see a leopard which is always a prized sighting here for the fortunate few, but Rosa was keen to photograph everything that moved and was especially excited by our close proximity to crocodiles when our safari vehicle was tilting precariously in the deep pot-holed tracks alongside their water-holes! 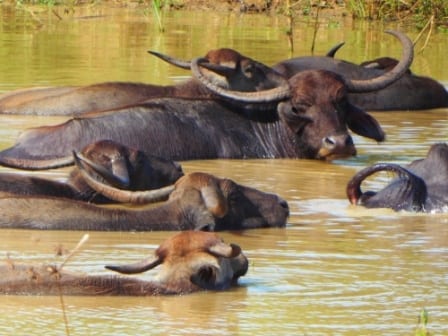 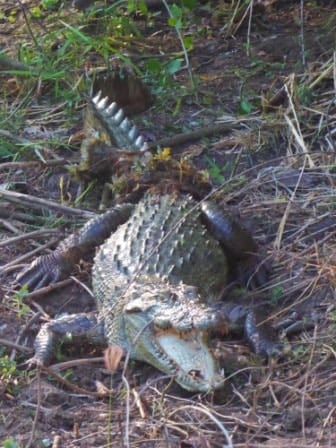 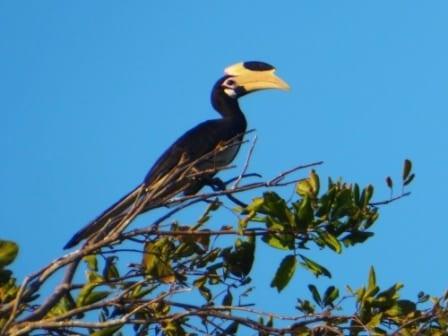 We continued eastwards to Arugam Bay where we stayed 2 nights and spent our full day here watching the fishermen hauling in their catch and even helping them too with pulling in the ropes. ‘A-Bay’ is a surfer’s paradise and by May/June the big barrelled waves roll in making it reputedly one of the best surf beaches in the world.

There followed a 6 hour drive up the now upgraded and sublimely scenic east coast road through Batticaloa (short lunch stop to see the old Dutch fort) and onwards past the vast natural harbour of Trincomalee to arrive at the gorgeous white-sand beaches of Nilaveli.  Here we took a boat ride out to the superb coral reef of Pigeon Island where we snorkelled with turtles and black-tipped reef sharks.  It is slightly worrying to be swimming with your kids when a couple of 5 foot-long sharks are gliding amongst you but we had been assured by the local fishermen that these creatures are ‘normally safe’! 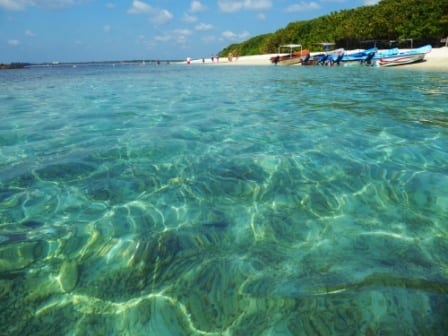 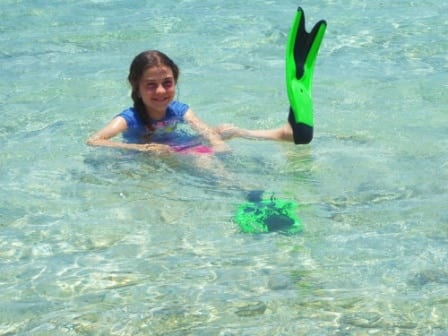 The east coast of Sri Lanka has only re-opened in the past few years after the ending of the civil war and it remains very much off the beaten track.  We loved our time here and it will be a place I would encourage anyone to include as part of a visit to the island.

We now turned towards the interior where away from the coastal sea breezes the uncommonly high temperatures of above 35 degrees we had enjoyed since the start of the trip became harder to deal with.  We cycled around the Buddhist temple ruins of Polunnaruwa and doused ourselves with jugs of water from a stall-holder’s tap to cool ourselves down in the midday heat.  After marvelling at the famous ‘sleeping Buddha’ we retreated to the supremely air-conditioned restaurant of the Lake Hotel for a reviving cup of tea (and milkshakes for the kids) looking across the water.  Apparently Queen Elizabeth dined here during her visit in 1956.  Our few spare rupees for this unscheduled treat just about covered the drinks! 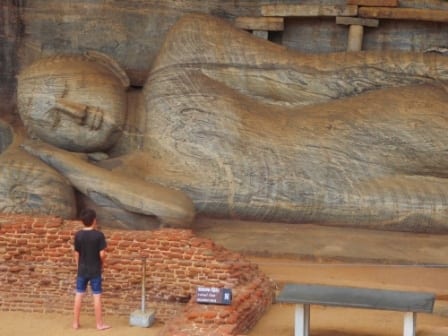 The next day we moved on to Sigirya and stayed in a marvellous tree-house deep in the forest that surrounds the famous rock fortress.  It was a great experience and we loved lying in our beds each of our two mornings there listening to the sound of the frogs, bugs and birds waking up. Back of Beyond, Sigirya Inside the Treehouse, Back of Beyond

We were at Sigiriya’s National Park ticket office at 7.00 am prompt to ascend Sigiriya Rock before the mercury started to rise and we were amongst just a small handful of people to climb at this early time reaching the top well before 8.00 after climbing along and up the airily-perched ledges and steel stair-cases.  The ruined buildings (and pools!) on the summit are either a monastery or a royal palace depending on which archaeologist you listen to but whichever is correct, the views from the summit are stupendous!   We re-traced out steps to see the famous painted frescoes of the maiden ladies which remain astonishingly well-preserved. 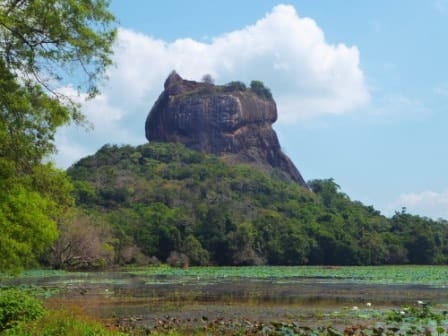 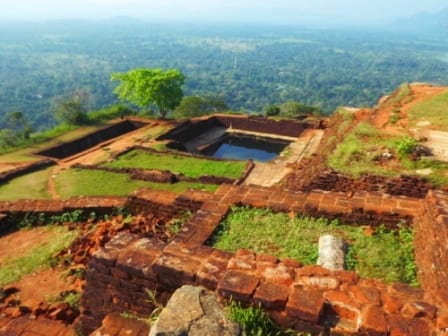 Our final stop was Kandy – Sri Lanka’s old capital and set amidst rolling green hills which offered much-needed respite from the heat of the central plains.  We watched a lively evening show of Kandyan drumming, dancing and fire-walking at the lake side as our final cultural experience of the trip before we completed our anti-clockwise circuit of the island and headed home. 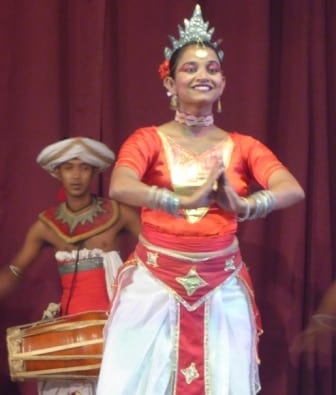 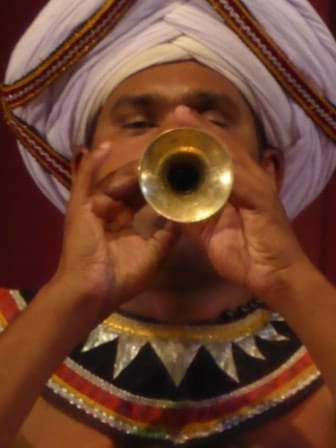 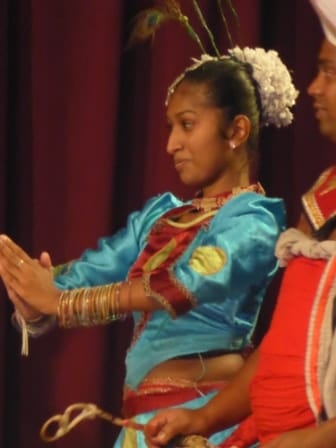 We had a super sunset at Negombo on our last evening as we spent our final couple of days on the west coast where the locals were partying hard to celebrate the upcoming Sinhalese ‘New Year’. 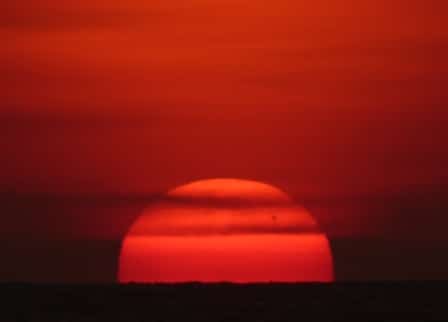 It is always great fun travelling together as a family and we feel we have stored up treasured memories from our time in Sri Lanka.  Everyone is so  welcoming when you travel with children and as English is such a strong second language In Sri Lanka it is possible to have conversations with local people that go beyond the basics and this enabled our youngsters to share a deeper understanding of the country we were travelling through.  The variety of experiences – wildlife, culture, snorkelling and beaches – makes this a very family-friendly destination and I’d recommend it as a great choice for an all-round holiday that combines ‘seeing, doing and relaxing’. 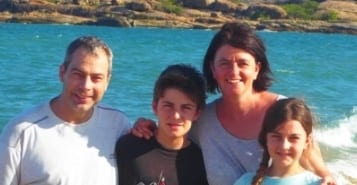 If you wish to hear more about the places we visited or would like help putting a trip together, please get in touch and I’ll be happy to discuss.  – Rob