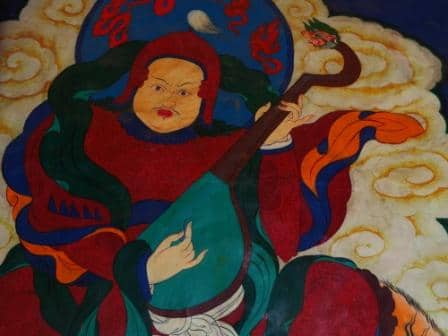 Rob reports on his week travelling through the remote mountain region of Ladakh where he enjoyed wonderful hospitality amidst unparalleled panoramic scenery.

Ladakh is a region of dramatic landscapes situated at the western end of the Tibetan Plateau and sandwiched between the world’s two mightiest mountain ranges – the Himalaya to the south and the Karakoram to the north.  Until the mid-1800s it remained a hidden kingdom practicing its own particular blend of Tibetan Buddhism and  although in the past 150 years or so it has been governed by India, it remains one of the most remote and inaccessible regions of Asia.

For up to seven months each year, when the winter snows blanket the land, Ladakh is completely cut off from the outside world with only its small airport at Leh providing essential supplies.   It has been often called ‘Little Tibet’ because following the destruction of monasteries in central Tibet in the wake of the Chinese Revolution of 1949, Ladakh is the one remaining place where Tibetan Buddhism continues undisturbed as a living culture.

My journey to Ladakh began with an overnight flight from Heathrow to Delhi where a mid-morning arrival was followed by a whirlwind tour of the main sights of the city starting at the impressive Red Fort and continuing with a cycle rickshaw ride through the crazily crowded bazaars of the market streets of Chandni Chowk. 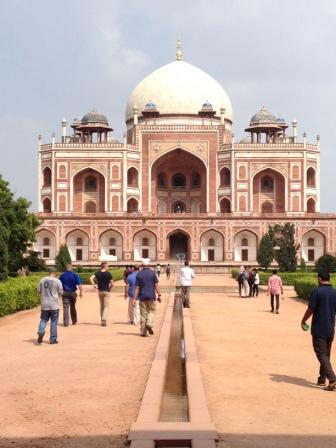 This was followed by a visit to Humayun’s Tomb (an elegant mausoleum that provided the template for the later-constructed Taj Mahal) and finally a look at the tower of Qutb Minar built in the late 1100s and which at 240ft-high remains to this day the tallest brick minaret in the world.

The following morning I was up at 4.00am battling severe jet-lag to catch the early flight over the Himalayas to Leh, a 90-minute journey that afforded incredible views of snow-capped peaks extending like storm-tossed waves as far as the eye could see.  Ladakh holds more permanent ice than any other part of the world outside of the Polar Regions and the huge glaciers below the wings of the aircraft were ample testimony to this. 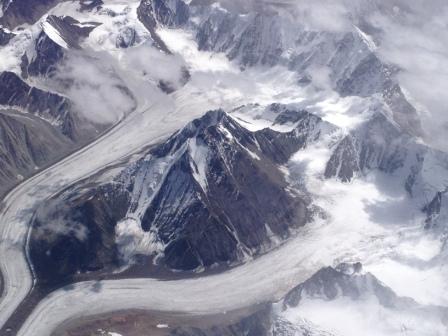 Ladakh’s ancient capital of Leh is 11,500ft above sea level and I was aware of the altitude as soon as I arrived.  The crisp mountain air was a bracing contrast to the 38 degree heat of Delhi and I extracted my baggage from the carousel with a slightly dizzy head.  I was met by Gyalson – my local guide for the next week.  On the drive into town I was immediately aware of the cultural divide we had now crossed in our flight over the Himalayas.  The physiology of the people here is derived from Central Asia and the prevailing Buddhist culture is evident in the hilltop stupas that stand above the town and the abundant prayer-flags that colourfully flutter above the streets. 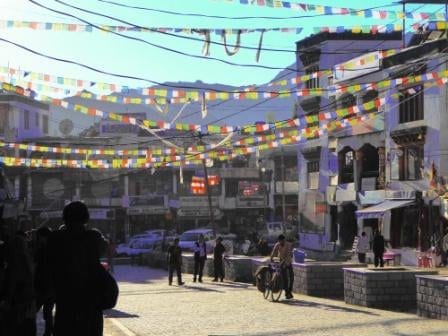 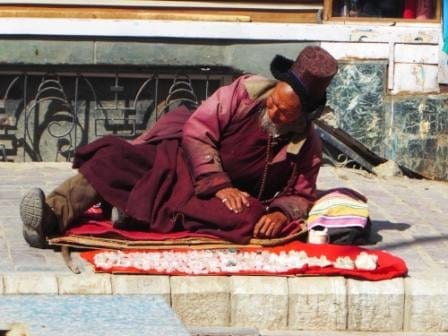 I checked in to the ‘Omasila Hotel’ which is where Brad Pitt had stayed when filming ‘Seven Years in Tibet’ in 1997. My room had a superb view of the snow-clad peak of Stok Kangri (20,182ft) which is a non-technical climb popular with trekkers.    After a couple of hours of utterly dreamless sleep I took a stroll around the town.  I ascended breathlessly up the 200 steps to the Shanti Stupa and then explored the ancient Palace which is perched on a lofty ridge directly above the town.  Built in the 1500s and previously the residence of the Kings of Ladakh, the Palace is a warren of narrow passageways and dusty rooms rising through nine levels, with religious texts lining the walls and murals giving a glimpse of the splendours of earlier times.  The views across the town are breathtaking. 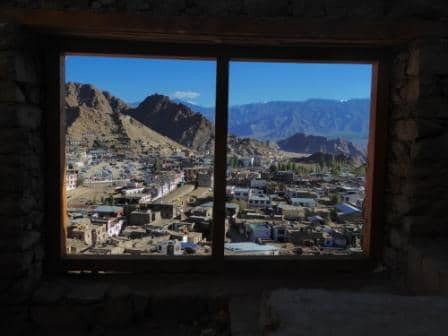 The following morning Gyalson collected me from the hotel and we spent the day exploring the two main monasteries of the Leh valley.  We headed first to Hemis Monastery – a stunningly colourful sight hidden in a high side valley above the Indus River.  This is a prosperous, working monastery with 350 red-robed monks in residence. There is a calm, dignified atmosphere and it is sobering to reflect that this is how many monasteries must have existed in neighbouring Tibet before the Chinese invasion. 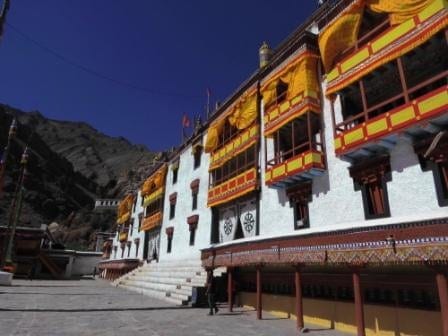 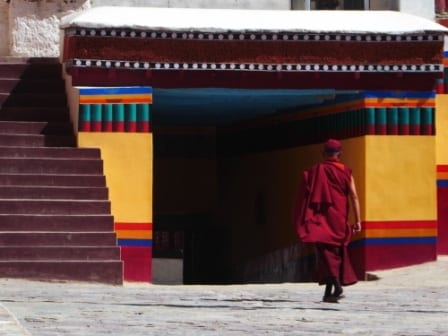 After an hour of wandering the site and enjoying its well-stocked museum of ancient artefacts, we moved on to Thiksey Monastery which has a striking location rising above golden fields of barley on a knoll above the Indus flood-plain. 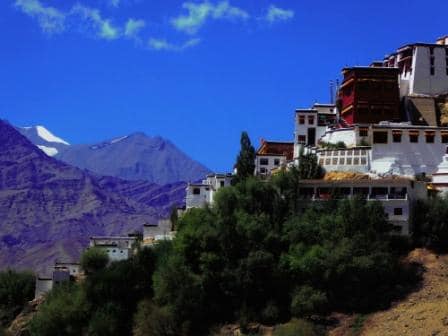 Its centerpiece is a 40ft-high statue of the Buddha and again it is a working monastery of 80 lamas with a nunnery attached too.

On our way back to Leh we witnessed huge crowds of locals gathering to welcome the Head Monk of Hemis Monastery as he arrived at the end of a fund-raising cycle journey all the way from Delhi.  Gyalson commented with a touch of pride that no one would be bothered about a rock star turning up in Ladakh but the whole place goes crazy over its monks!

The next day we left Leh and headed for the Nubra Valley which lies close to the Pakistan border.  The 80-mile journey there is via the much-heralded ‘Khardungla Pass’ which at 18,360ft is the world’s highest motorable road.   After a dizzying ascent of tightly-wound hairpin turns we arrive at the top and see the Karakoram range for the first time, glistening white in the distance. 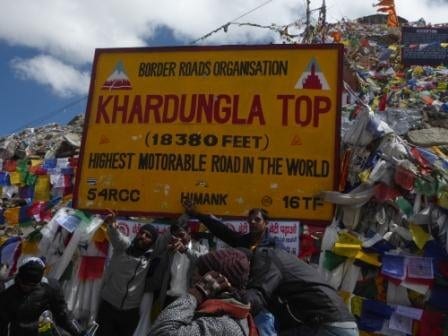 Due to the thin air at the top (unbelievably we are at the same height as Everest Base Camp) there are signs erected warning people not to linger for more than 20 minutes or else be at risk from mountain sickness. 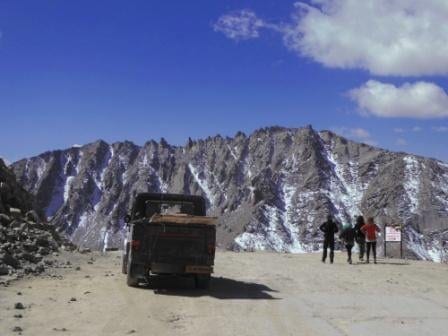 Our descent into the Nubra Valley brings staggering vistas across the flood plains of the mighty Shyok River which flows from the Tibetan Plateau and onwards to Pakistan.   The inhabitants of the valley have used irrigation channels to grow crops and help nurture orchards of apricot trees.  To complete the scenic wonders of this remote enclave there is a small population of double-humped camels – descendants from the caravans of the Silk Route trading days – which occupy a small area of sand dunes near the village of Hunder.   We arrived here in the late afternoon sun and watched local tourists taking rides against the backdrop of the rippling dunes before hiking uphill to enjoy another memorable sunset. 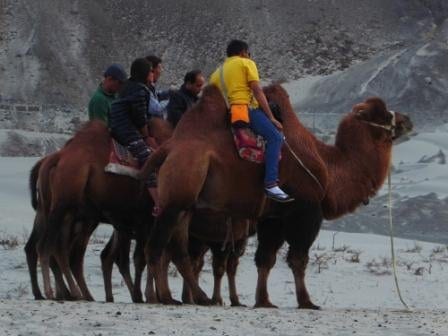 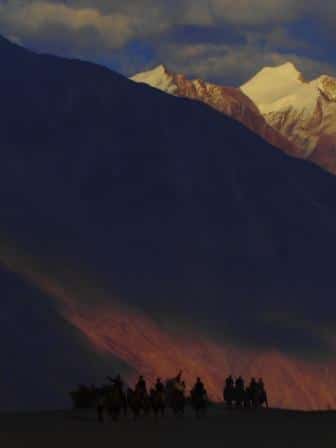 We remain in the Nubra Valley the next day, visiting 2 local monasteries – the humble outpost of Ensa and the luminously beautiful Samtanling. 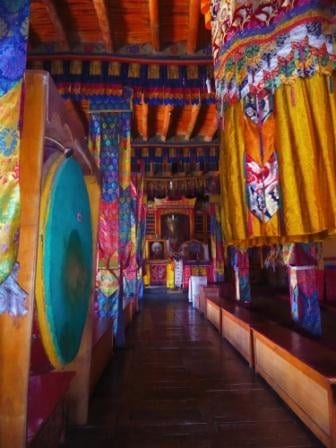 We also enjoy a dip in the hot spring waters at Panami and take a short hike to ‘Wishful Lake’ – a pretty spot which is the permanent relic of a glacial retreat thousands of years ago.

We return over the Khardungla Pass the following day, after a visit to Diskit where the ancient Palace once afforded a strategic view across the broad valley floor to Sumoor where the invading Mongol hordes would emerge on regular incursions.   Tonight I stay in the village of Saboo just outside Leh where I go for an evening stroll, scrambling up to a small ruined citadel to enjoy a vivid sunset across the Indus Valley. 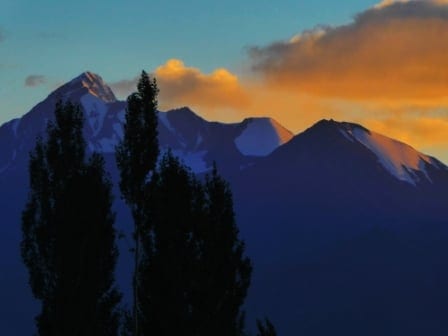 The next morning our objective is the remotely-located Lamayuru Monastery which we reach by way of the ‘old road’, an outrageously precarious track that rises like an escalator via innumerable hairpin bends.  As we approach the Monastery we get a view across the bizarre lunar landscape that marks the point where 50 million years ago the Indian sub-continent slammed into the Asian land-mass and thus created the Himalayas. A broad swathe of butterscotch-coloured rock seems to have been caused by the collision and contrasts strongly with the russet browns and blacks of the rest of the rock strata.  The Monastery is situated on a crest above this chaos of geology creating an almost Dali-esque sense of surreal wonder. 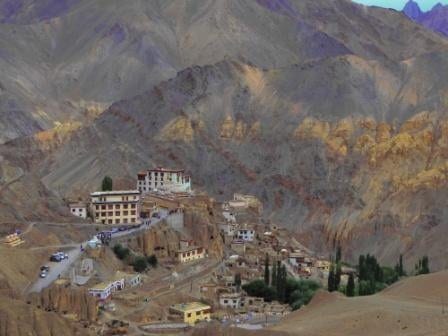 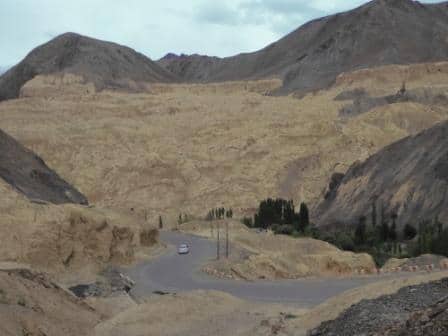 My accommodation tonight is the lovely Uley Ethnic Resort where I have a restful sleep in a comfortable cabin perched on a bluff above a bend in the fast-flowing Indus River.

My final day is spent hiking over a couple of passes in the hills between the villages of Hemis Shukpachan and Timosgang, meeting a few trekkers coming the other way and enjoying glimpses of nearby snowy peaks.  After the hike we visit Rizong, a truly ‘lost in the mountains’ monastery where the resident monks were sharing a meal cross-legged on the floor completely untroubled by our sudden intrusion.  Finally, we make a visit to the ancient and Kashmiri-influenced monastery of Alchi, famous for its 1000 year-old wall-paintings and intricately decorative wood-carved arches. 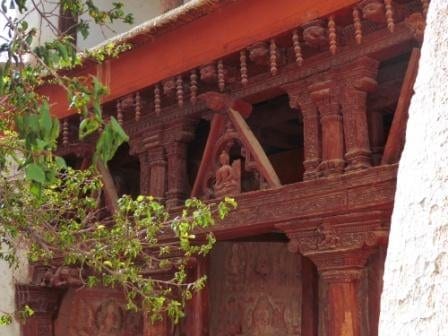 I am back at ‘The Omasila’ in Leh that evening and the next morning I say a fond farewell to Gyalson who had been wonderful company as well as a superb guide, before boarding the flight back to Delhi.

My week in Ladakh was a marvellous introduction to this land of mighty mountains and monasteries steeped with ancient treasures.   I would love to return here – in winter to track elusive snow leopards and in summer to trek amongst the villages way beyond the road-heads where the ancient ways of life continue to exist. 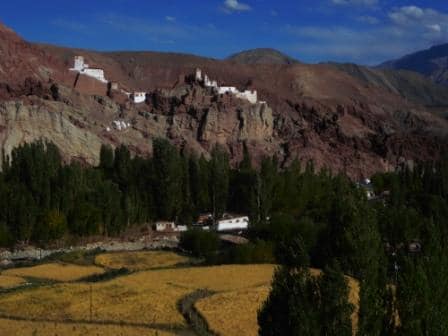 Many thanks to everyone at ‘Trans Indus’ for all their assistance and kind hospitality, with special thanks to Gyalson for his wisdom and Sejal for her limitless patience!