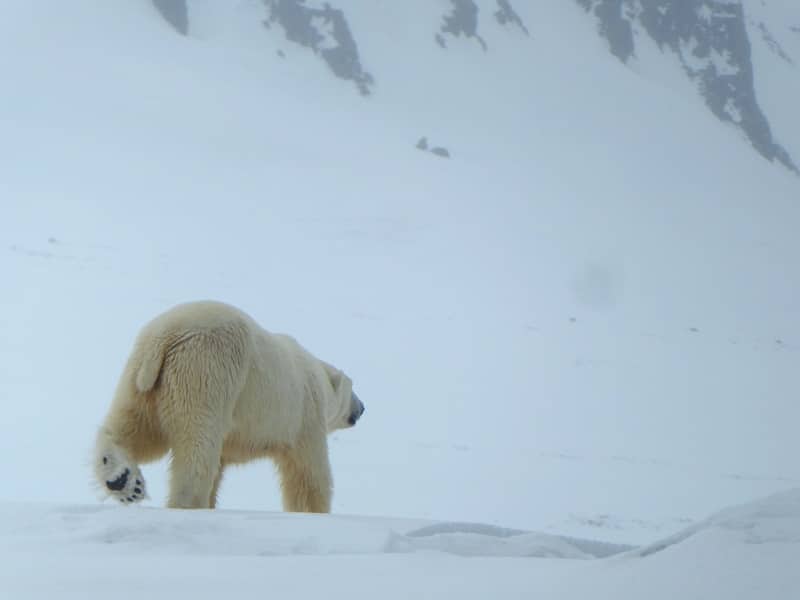 Rob has just returned from a wonderful voyage around the Arctic archipelago of Spitsbergen enjoying some amazingly close encounters with polar bears, walruses and arctic foxes whilst journeying on board the much-loved polar vessel ‘Akademik Vavilov.’

‘Having encouraged so many of our clients on to Arctic and Antarctic voyages over the past 20 years to fill the ‘Vavilov’ almost twice over, it was about time I ventured on to this fabled vessel myself and undertook my first polar journey. So, one afternoon in mid-June, I finally found myself on the dockside in Spitsbergen’s ‘capital’ Longyearbyen about to ascend the gangway to this sleek, ice-strengthened ship.

I had travelled here by way of a 3-hour flight north from Oslo.  Spitsbergen is just 800 miles from the North Pole and the whole group of islands lie at a significantly higher latitude than even the north coast of Alaska!  As good as makes no difference, here you can say you’re truly on top of the world.

Longyearbyen is an interesting mix: think mining camp meets ski resort.  There are very few cars here: hundreds of snowmobiles sit jacked up on wooden pallets awaiting the return of winter when they are the only means of getting around in the deep snow.   We had a few hours here before boarding the ship – enough time to visit the museum (very good) and the other building of interest, the humble and rather wonderfully centrally-heated church on the slopes of the valley in which the town sits.  The temperature was a few degrees above zero and hovered around this level for the whole 2 week trip.  But no matter, upon boarding we were soon allocated our padded all-weather gear and this plus a decent hat and gloves is enough to keep warm whilst out on deck. 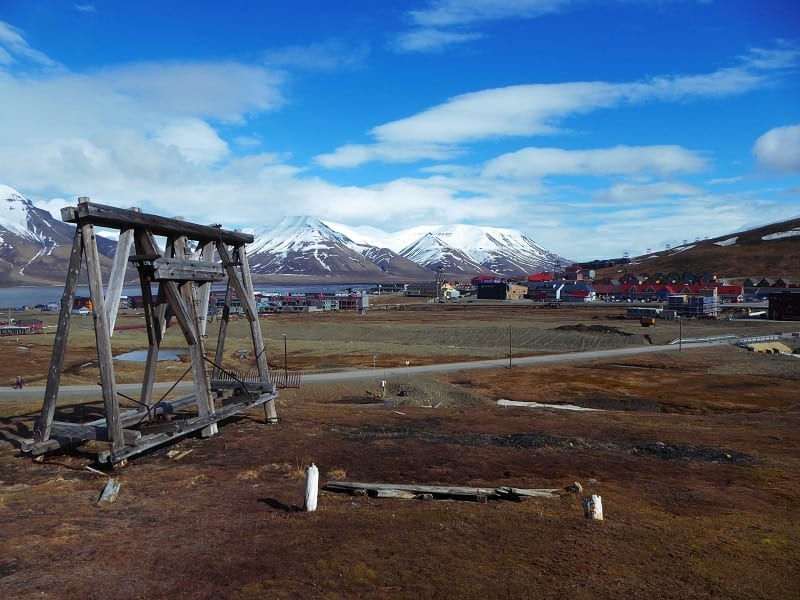 We knew we were in for a good trip when we had a distant sighting of a blue whale as soon as we pulled away from Longyearbyen – the distinctive large water-spout giving us the clue.

The ice charts indicated a good area of fast ice between the main island and its neighbour Edgeoya, so by the morning of our second day at sea we had positioned ourselves here after sailing first southwards before then heading north east along the coast.

We were rewarded almost immediately by a sighting of a mother polar bear with 2 young cubs at a distance of about 400 metres.  Unexpectedly, as this is not a common occurrence, one of the cubs decided to come across to the boat to take a look at us.  Naturally the other cub followed and almost with a resigned shrug, the mother bear too.  There followed 10 magical minutes when the three bears patrolled below the bow of the boat looking up and exchanging their muted grunts for the noise of 100 camera shutters going flat-out. 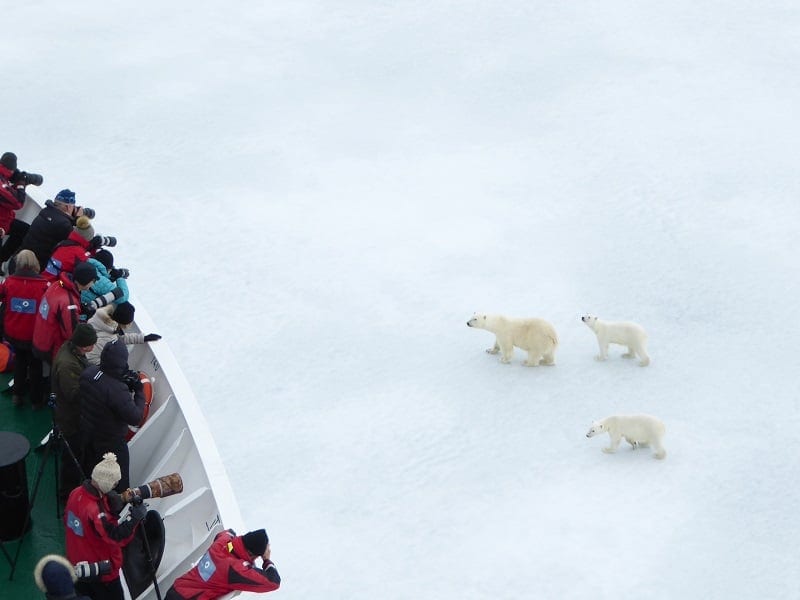 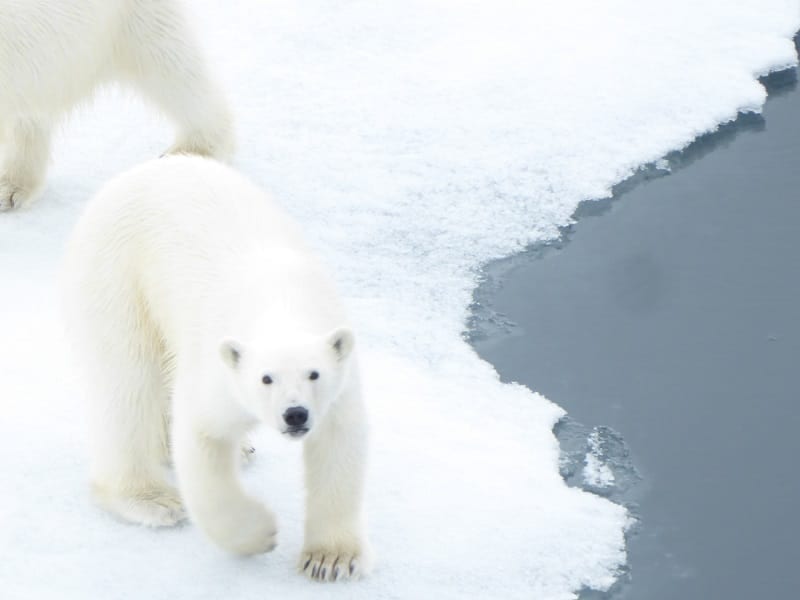 As they wandered away, the 2 cubs even did a synchronised back-rub on the ice as a final bonus gesture to the mesmerised audience. 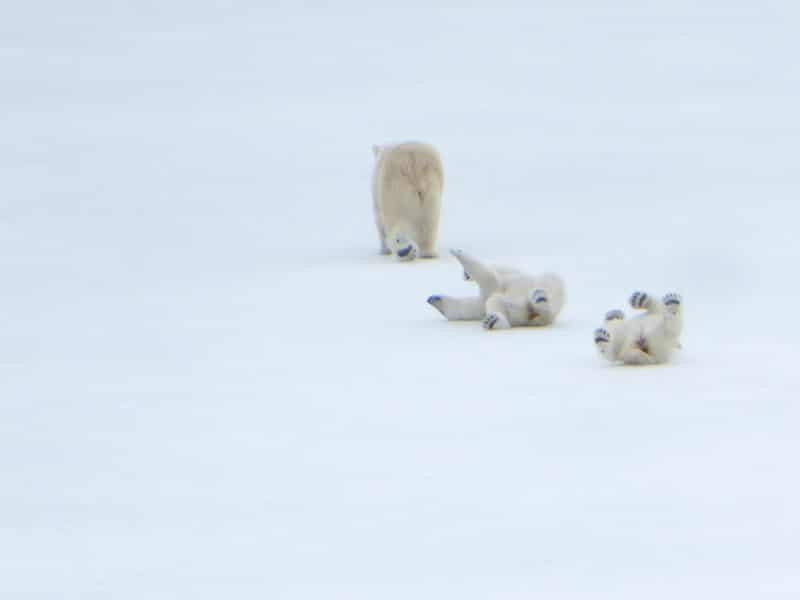 Our delayed breakfast was a-buzz with happy chatter and I even think some aboard skipped part of the meal to excitedly review their cameras for their photographs.

We spent the next 3 days ‘working the ice’ and had more sightings, mostly at around 300-800 metres distance.  With the use of binoculars and telescopes it was fascinating to watch the bear behaviour which even included an adult male stalking a sub-adult bear for some 20 minutes.  Eventually, the younger bear swam and then trotted away with a burst of speed. The adult male clearly felt it would be too demeaning to enter into a race.  Another episode was a male bear finishing a seal kill and wandering off with its belly so full its back was sagging under the weight!  On one day alone we see at least 10 different bears and the crew keep remarking how lucky we are being. 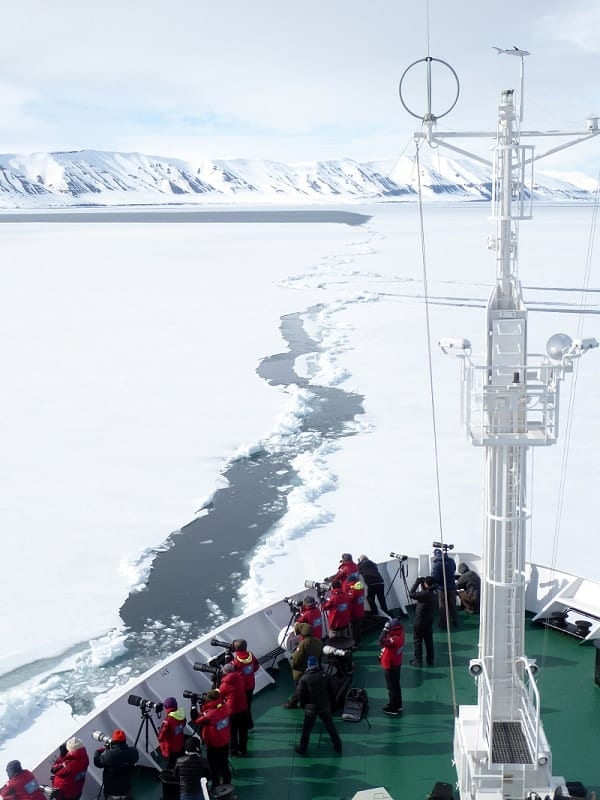 It was hard to tear ourselves away from this rich seam of sea ice but eventually we push onwards and passed through the Freeman Channel to emerge on the north-east corner of the main island.  Here we had probably the most exciting day of the voyage.  It started in a snow-storm as we got aboard the zodiacs (hard-hulled inflatable boats which can be quickly launched from the mother ship) and motored underneath huge sea cliffs, home to around 60,000 guillemots.  The skies were teeming with sea-birds (fulmars, ivory gulls and skuas mixed in too) and every ledge was occupied with avian creatures huddled shoulder to shoulder in raucous chorus. 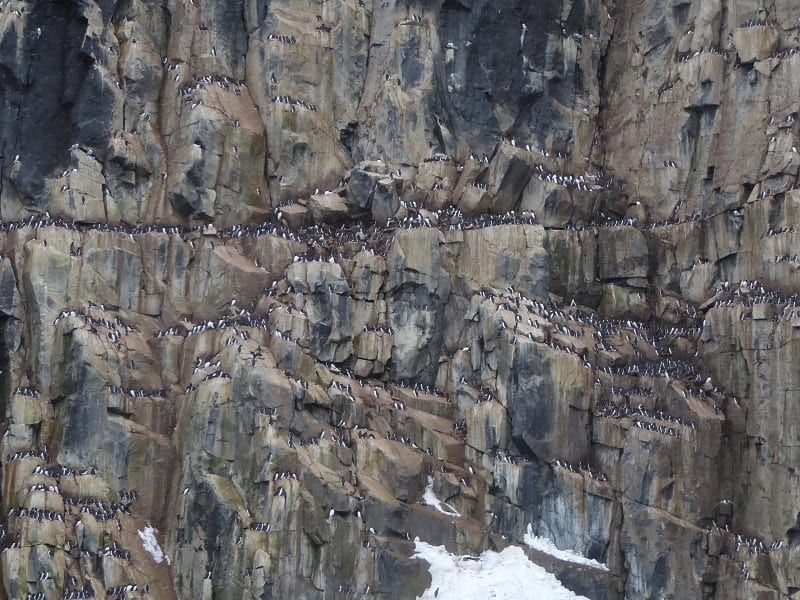 The swell suddenly dropped and at the far end of the cliffs and sea stacks we were delighted to find 3 arctic foxes scampering along the shoreline in and out of the crags and gullies, looking for carrion.  They are much smaller than British foxes and were between winter and summer coats, so have a rather vagabond appearance.  Proper scallywags! 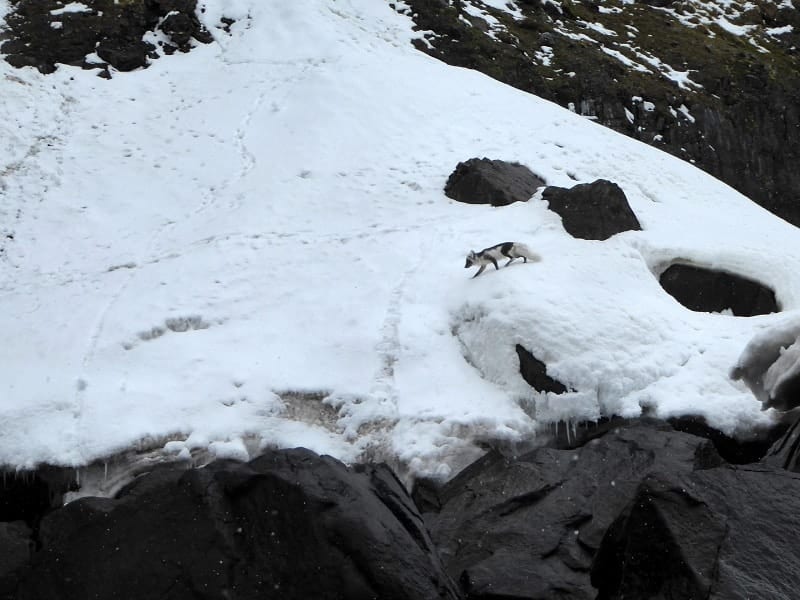 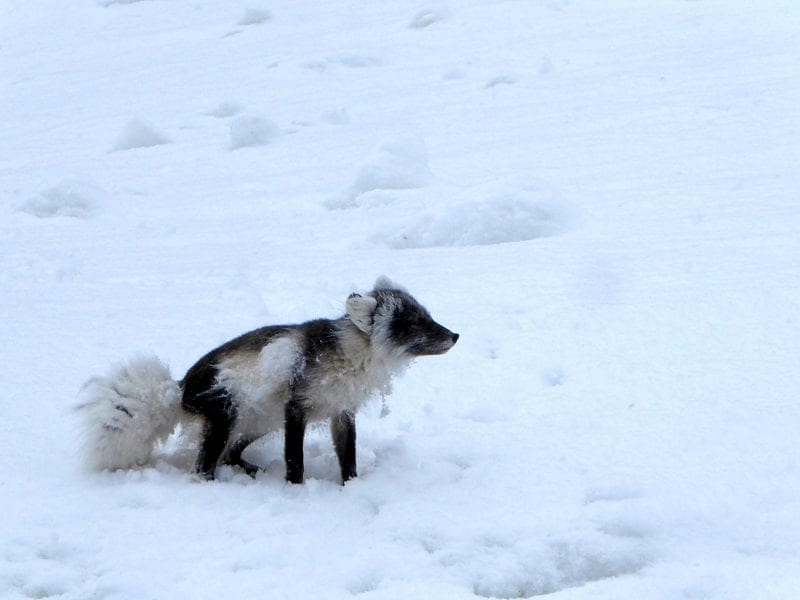 Further along the coast we stopped amongst some electric blue icebergs – more perching real estate for the guillemots to enjoy! 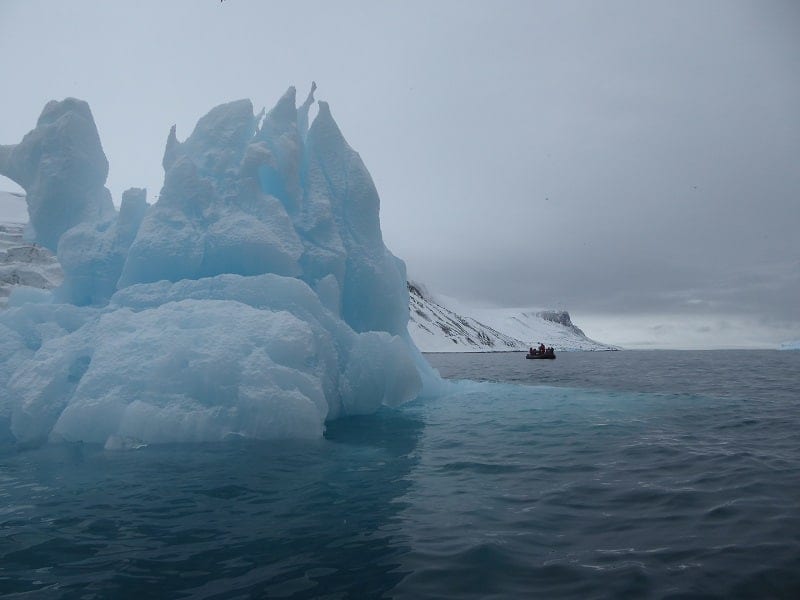 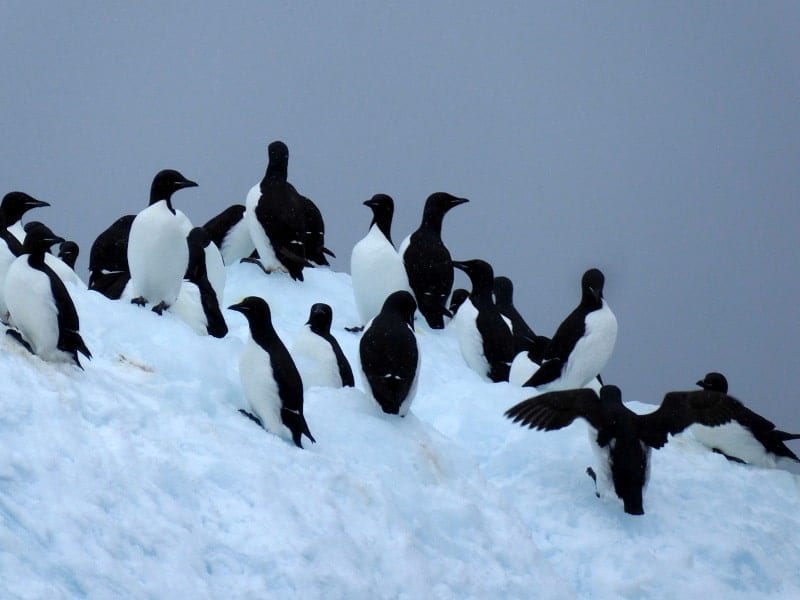 After lunch back on the ship we were about to take to the zodiacs for a trip to a walrus haul-out when we find that a mother bear and 2 cubs were walking on sea ice near the shoreline. We scrambled into our outdoor gear and within 20 minutes we were approaching them stealthily from about 100 metres away.  Over the course of the next hour we took turns to leap-frog our zodiacs as we got gradually closer whilst motoring parallel to them, eventually around 30 metres away.  Again, it is an absolute delight to observe them at such close quarters. 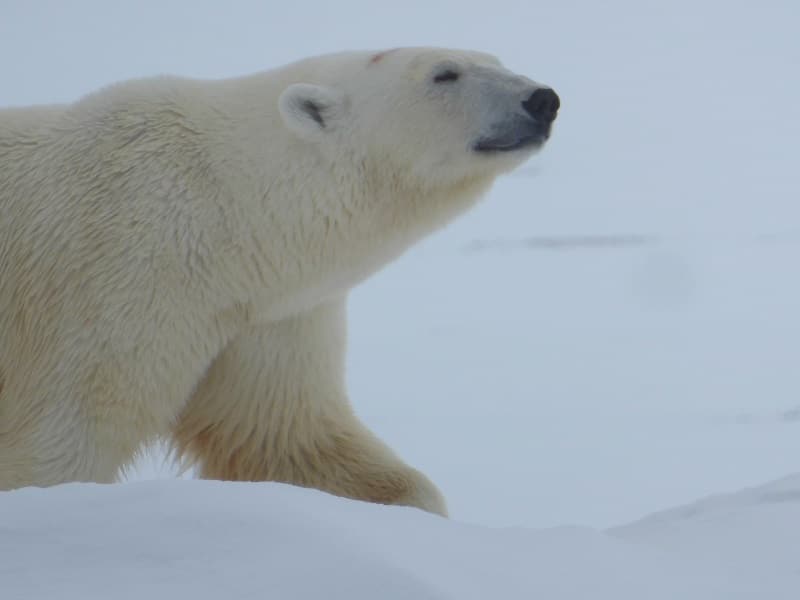 The mother seemed completely unperturbed by our increasing proximity, whilst the cubs seemed – as always – simply accepting that it is their duty to follow where ‘mum’ goes.  Each had patches of red on their fur suggesting they had recently eaten from a kill – and explaining perhaps their slow post-meal plodding. 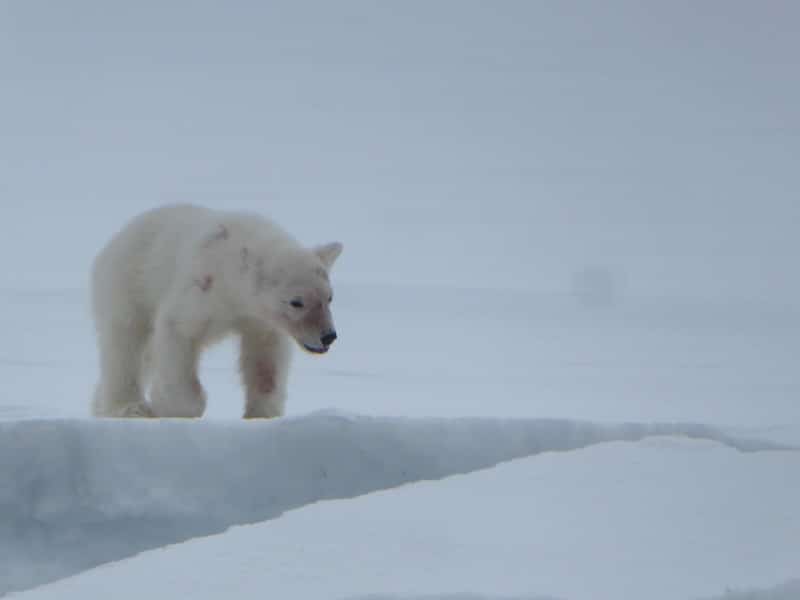 Finally, we returned to the original objective – the walruses – and we enjoyed an hour parked about 50m from their haul-out beachfront marvelling at their harrumphing and lolloping manoeuvres.  They are uniquely compelling creatures with their strangely at-odds combination of savage-looking tusks and a top speed on land of about 2 metres a minute! 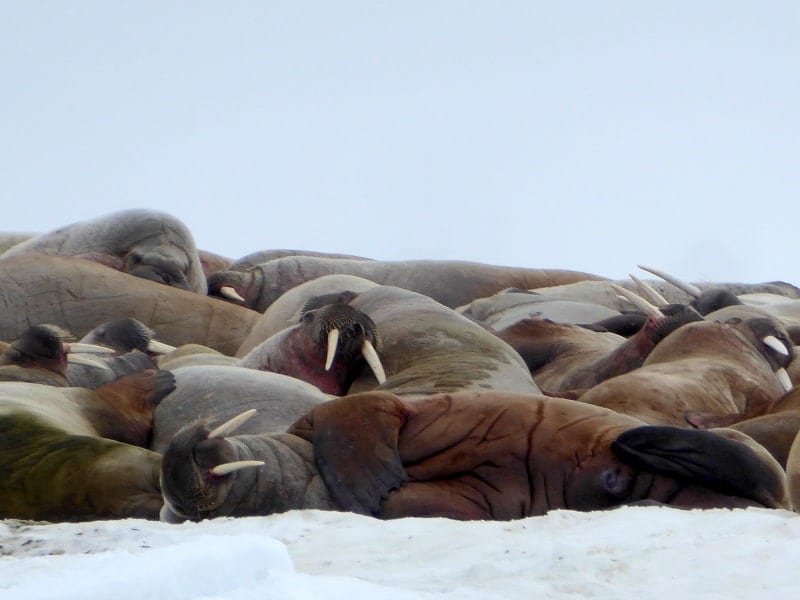 To round off this wonderful day one of the crew gave a talk that evening about his circumnavigation of Spitsbergen by kayak – the only time this has been done.   Other lectures during the voyage were held in between zodiac trips and ‘happenings’ out on the ice and they included lessons in wildlife photography, polar bears (of course), arctic bird life and a history of Svalbard (the other name for these islands).

BBC presenter Mark Cawardine was also on board as one of the wildlife guides and gave very generously of his time helping people out with tips on taking better photographs.  He gave a talk about his TV travel series with Douglas Adams and latterly with Stephen Fry.  Absolutely superb – a great mix of hilarious anecdotes and heartfelt observations on the conservation of the world’s most endangered species.

The days rolled by very agreeably.  One morning we passed a colony of over 300 walruses – the water was positively boiling over with them as they surged in small packs in between the ice floes.  On one afternoon the wind dropped to complete stillness and the sea looked like glass.  Later many of us stayed up late as the ‘midnight sun’ was shining so boldly.  I had my photo taken at 0000hrs exactly and the picture below shows the incredible strength of the midnight sun.  And a few of my wrinkles too!   Extraordinarily, between April and August, the sun never sets at these latitudes of around 80 degrees north. 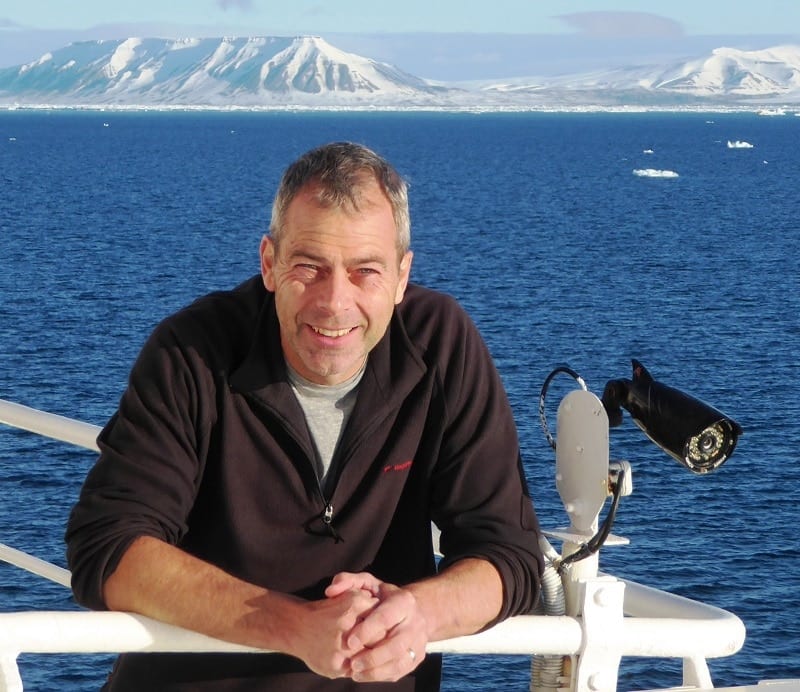 We had by now returned to the sea ice we had first explored at the start of the trip and we had further multiple sightings of bear activity including a mother and cub at a seal kill.  The sun continued to shine and we had beautifully clear light conditions for 2 utterly enchanting days.

Then the swell got up and for 36 hours the ship swayed and rocked.  We were denied the chance to go ashore until this subsided but we did find a brief weather window to make a zodiac excursion alongside a huge glacier in one of the more sheltered fjords.  We were back on the mountainous western side of the island again and the scenery here is spectacular.   It’s a mighty impressive arena populated by arctic skuas, auks and arctic terns. 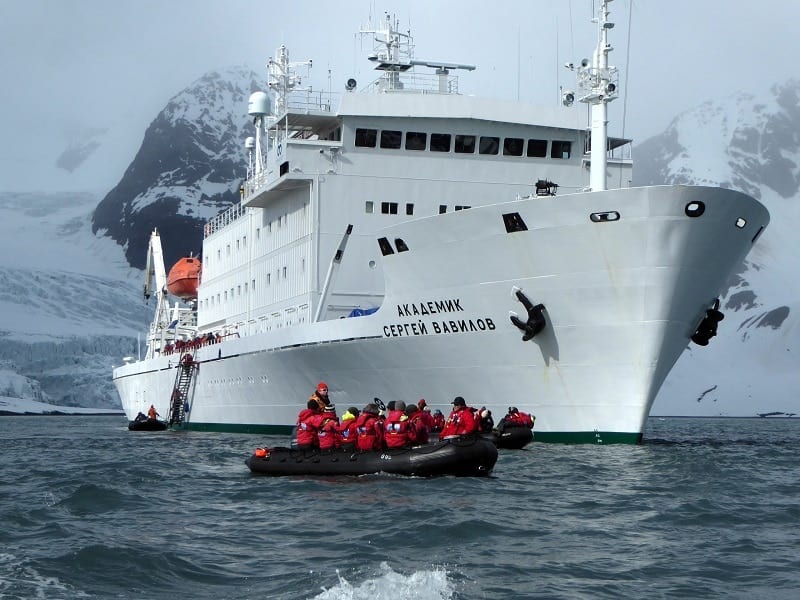 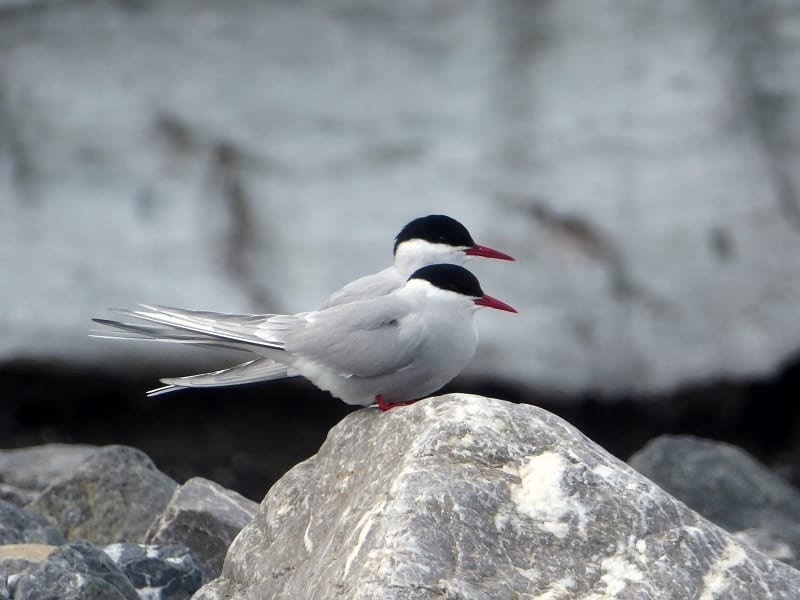 On our penultimate day we went ashore at the foot of a striking peak called Alkehornet.  Here we saw reindeer up close for the first time.  The Svalbard species stands around a metre high at the shoulder and unusually both males and females have antlers. 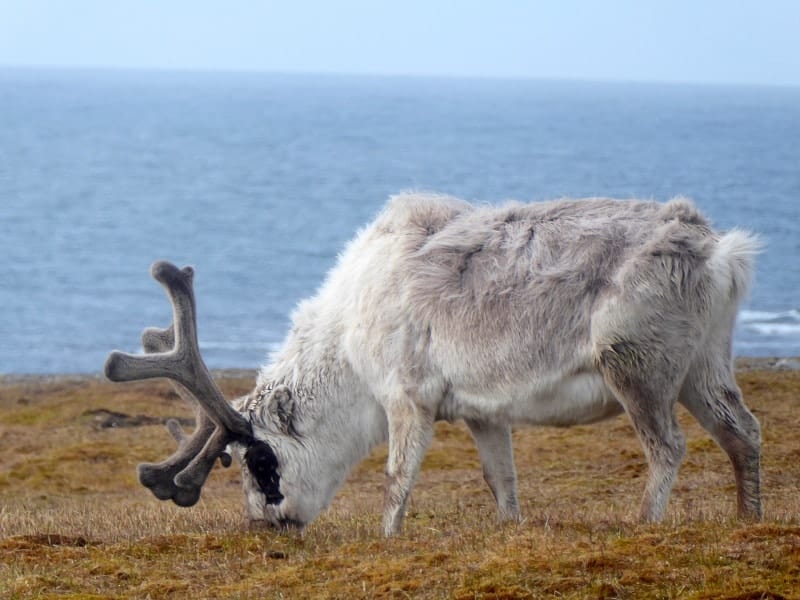 The big highlight though was a wonderful half-hour watching a mother arctic fox and 3-week old cub.  They have a den – a crack in a boulder on the hillside – and we can observe them from just 50 yards away! 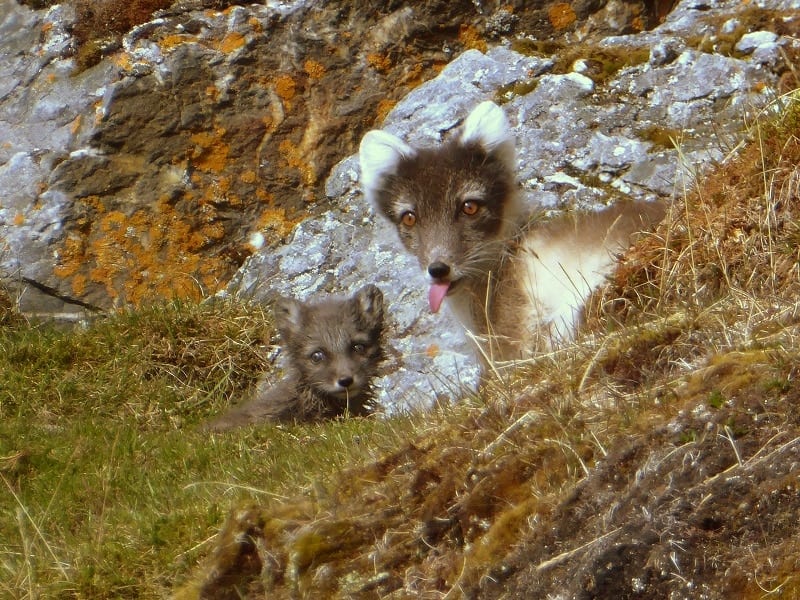 Finally, we returned to Longyearbyen.  The last few hours before disembarkation saw a return to blue skies, glassy waters and extensive views in the dry polar air. 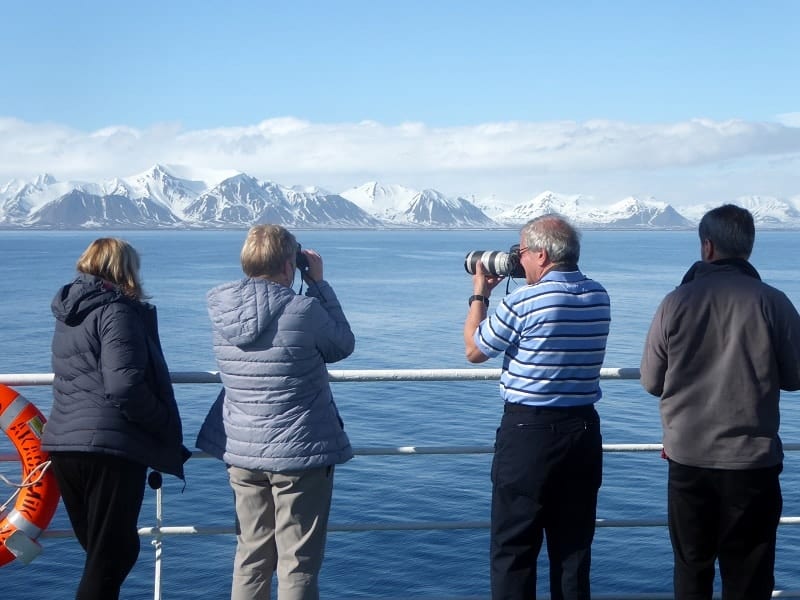 I say my goodbyes to my fellow passengers who helped make the journey so enjoyable with their good company and shared passion for wildlife and wild places. I thank the crew for their wonderful hospitality and of course Paul Goldstein of Exodus who led this expedition from start to finish with his customary unbridled energy and enthusiasm. We’d had the most incredible journey.  As we returned to lower latitudes we knew that the many magical moments from these past 2 weeks’ were indelibly etched in our memories.’

For details of trips to Spitsbergen and other polar itineraries including Antarctica, South Georgia, Greenland and the Canadian Arctic, talk with me about the various options, choice of vessel and when it is best to visit to maximise your wildlife sightings.  – Rob