Sri Lanka in a Coconut Shell 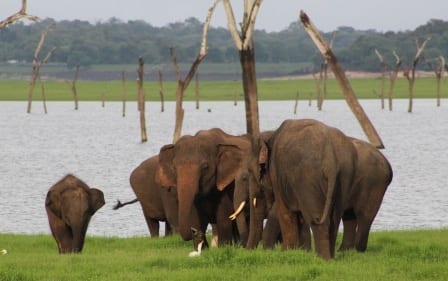 Camilla writes about her trip to Sri Lanka where she enjoyed seeing the main highlights of the island … and also had an impromptu glimpse inside a provincial hospital along the way!

We got off to a delayed start spending an extra hour and a half at the gate at Heathrow while the plane’s sat nav system was tinkered with! Whatever they did must have worked because 10 hours later we were landing safe and sound direct into Colombo thanks to Sri Lankan Airlines. The spectacular performance from traditional dancers to welcome us into the country distracted us from the humidity and a four hour transfer took us to the Sigiriya Hotel. Here we had time for a hot shower and a decadent buffet dinner before an early night in preparation for our equally early morning wake up call. 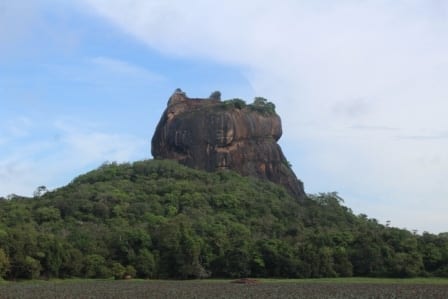 The climb to the top of Sigiriya, which translates to Lion Rock, is our first challenge of the trip. Arriving early allowed us to beat the crowds as well as the heat that gradually crept up on us during the course of the morning. Steep stone steps and pathways through water gardens and caves lead to the base of the 200m-high rock.  On the way up there is the opportunity to see the oldest Frescoes in the country, the images are so well preserved and the colours are still so vivid that it is hard to believe the works are over 1500 years old. The city and sky palace were built by King Kashyapa. Rejected by the Buddhist religion for ordering the death of his father he built his extravagant masterpiece, placed deep in the inhospitable forests of north central Sri Lanka, unbound by the usual constraints of the religious establishment. The colossal stone lion that once stood guard at the entrance to the sky palace has almost disappeared, all that remains are the enormous clawed feet of the creature at the base of the final ascent. 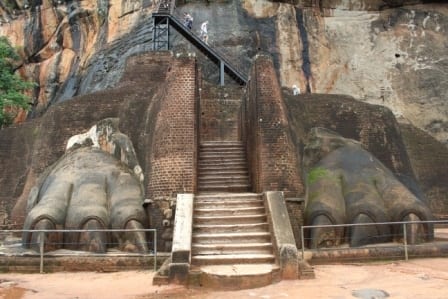 At the top your imagination fills in the gaps as you get a glimpse of the elaborate palace that once stood atop the ruins.

Our next stop was the ancient city of Polonnaruwa.  En route we saw Lake Parakrama – the first of many large, ancient, manmade lakes  that are dotted across the country. There are many sites to see here, our tight schedule only allowed us to take in the highlights, but you could wander for hours, if not days around the ruins, temples and stupas.  The round Vatadage is thought to have housed Buddha’s tooth relic before the city was burnt and looted. The 53m Golden Pinnacle Stupa is an impressive sight, but my favourite site here is the Rock Temple with its towering Buddha statues carved into the rocks. 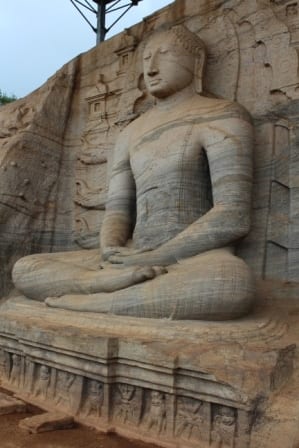 The day did not end there, a 4×4 safari through Minneriya Sanctuary in hunt of elephants was the finale! Our guide promised us at least 20 elephants and as we bumped and jostled our way through the lush green grasslands we were sceptical, counting three here and two there. Then a large body of water came into view and over 50 elephants of every size were gathered: grazing, drinking and playing. Once they had had their fill they slowly made their way off into the sunset in the calm, majestic manner that only elephants can.

We started the next day with another injection of culture at Dambulla Cave Temple. An impressive golden Buddha statue sits over the elaborate entrance to the Buddhist Museum, which overlooks the square that marks the start of the climb to the cave complex. We took our time making our way up the stone steps and slopes accompanied by the gangs of monkeys and their amusing antics. As we wandered barefoot into the first of the cave temples it became apparent why this place is such a treasured attraction. 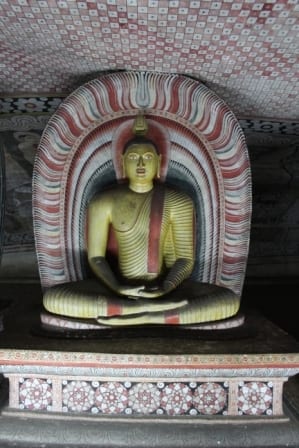 Throughout the caves there are 153 Buddha statues, 3 Sri Lankan monarch statues and 4 Hindu deities. The walls, ceilings and statues are all painted in vibrant colours and each cave is different from the last.

A refreshing coconut replaced some essential electrolytes before we headed back to the bus and hit the road to Kandy. On the way we made a couple of stops in a small town called Matale. The first was a wood carving workshop for a demonstration of the stages of carving, types of wood used and a mind blowing display of the chemical reactions used to create the all the pigments of paint from the shavings of one type of wood. The second stop was Matale Spice Gardens, a fascinating place where herbs and spices are grown to make Ayurvedic remedies. My visit here was cut short due to my unfortunate choice of position! I had chosen to park my flip flop clad feet in the path of a trail of rather tiny, rather angry ants, who were obliged to display their anger in the form of several unbearably itchy bites to my easily accessible naked feet! One might think that of all places to be, an Ayuveda garden with access to all possible remedies for such bites would be perfect in this situation and for a while it was. The kind guide slathered me from knee to toe in soothing lotions and potions and the itching and burning became bearable, but not for long. I have historically received many ant bites and my body decided this was just a step too far. As the anaphylactic reaction spread through my body and hives appeared in more places than I care to mention the executive decision was made to take me to the local hospital as a precaution. 2 hydrocortisone injections, 2 ECG’s 1 saline drip and several hours later I was back on my much less itchy feet. 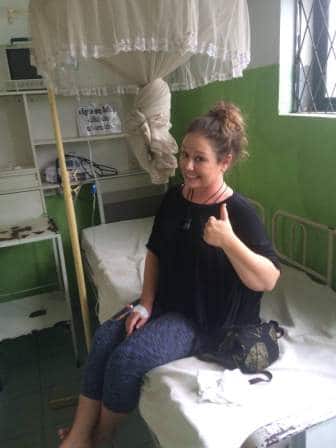 The hospital staff, our Exodus leader Ian, and our wonderful bus conductor Charminda did an amazing job of keeping me calm and of course alive! The hospital was resourced on a shoestring budget and it was amazing to see such great care in such poor conditions. With this minor setback behind us it was onward to Kandy in time for dinner.

This morning’s visit took us to the ‘Temple of the Tooth’ which houses the tooth relic of Buddha. It is said that Princess Hemamali, wife of Prince Dantha, carried Buddha’s tooth hidden in her hair when bringing it from India to Sri Lanka in the 4th century. The relic is housed in 7 caskets and is only on public display twice a day. This beautiful temple is actually surrounded by the royal palace complex of the former Kingdom of Kandy and there is much more to see here than a single temple.

We left the hustle and bustle of Kandy behind with a scenic drive up into the luscious green hills of tea country. The city of Nuwara Eliya is well known for its cooler climate and well preserved colonial buildings, homes and English-style lawns and gardens. Glenlock tea factory gave us a truly British welcome with a steaming cup of English breakfast tea, although I am not sure it would have satisfied anyone’s craving for a true British cuppa as this grade of tea, according to the experts, is not strong enough to warrant the addition on milk or sugar! 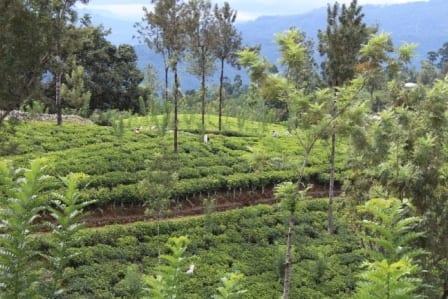 The factory tour was interesting and informative, we learned many tea related facts such as black tea, green tea, white tea and silver tips are all made from the same plant.

Another panoramic drive followed with great photo opportunities at Riwana Falls and the passage through Ella Gap took us to Kataragama ready for some leopard spotting in Yala National Park the next morning.

An early wakeup call started the day before sunrise.  The 4×4’s picked us up from our hotel and we made our way to the main entrance of the park. The safari was definitely a highlight of the trip, even though we were not lucky enough to see a leopard we saw an abundance of wildlife including peacocks, water buffalo, wild pigs, mongooses, deer, elephants, crocodiles, horn bills, hawk eagles, kingfishers, land monitors, monkeys and one very sad turtle being eaten by a crocodile. 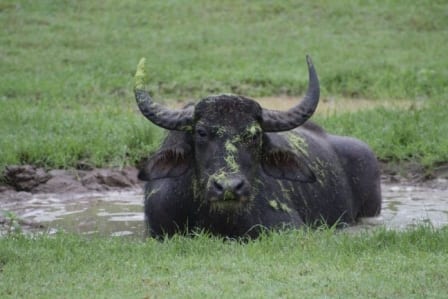 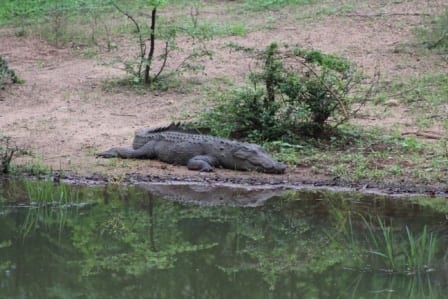 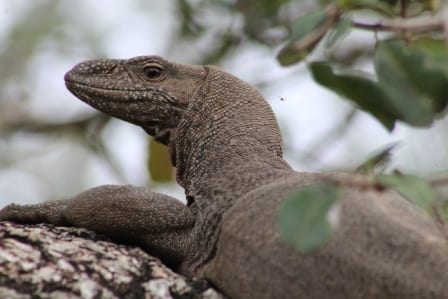 Back on the road we headed next to Ahangama by the coast. On arrival we threw our bags in the room and jumped straight in the ocean. The strong currents were a constant battle but the water was warm, the sand was golden and the sun was shining. After some competitive made-up water sports in the pool and a proper beach sunset we were ready to take a look around this small coastal town. In the dark the streets seemed even more chaotic with tuk-tuks and buses whizzing past. Crossing the road to the food market was a challenge. The locals were just as fascinated by us as we were by the unrecognizable fruits and vegetables they had for sale. A seafood platter of monstrous proportions seemed the only fitting way to end the day.

Our last day started in the best possible way, with another dip in the warm waters of the Indian Ocean. We just had time to give the boys a good thrashing at beach volleyball before jumping back on the bus to Galle. Originally occupied by the Portuguese, who were then chased out by the Dutch, Galle is famed for its fort, much needed by the Dutch to fend off not only attacks from the sea by the Portuguese, but also from the land by the locals  … they were not a popular bunch back in the day! 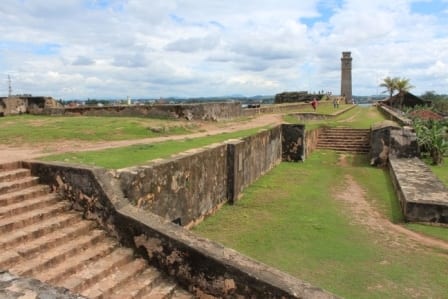 At the fort which dates back to 1669, we climbed up to the moon bastion for views across to the old town. Left to our own devices we explored the maritime museum, flagrock bastion and the lighthouse. Wandering through the narrow streets the heat eventually got the better of us and we opted for a tuk-tuk to take us over to the old town where we wandered through the old Dutch and fish markets.

As the weather closed in we made our way to the final destination on our whirlwind trip: Colombo. Huddling under my tiny umbrella navigating the streets was a challenge as the puddles grew and streets became rivers. A much drier tour of the Galle Face Hotel which was founded in 1864 and is located right on the seafront, gave us a break from the downpour. The hotel houses a small museum which is surprisingly home to Prince Philip’s first car, a 1935 model Standard Nine. A final buffet dinner and some tasty arrack cocktails ended the tour on a high.

The kind nature of the people and the abundance of culture and wildlife make Sri Lanka one of the most fascinating places I have been. Luckily we didn’t see leopards in Yala National Park, so I have a good excuse to go back!  I would like to extend a big thank you to Exodus for hosting me, especially Ian for his reassuring company during my hour of need in hospital!