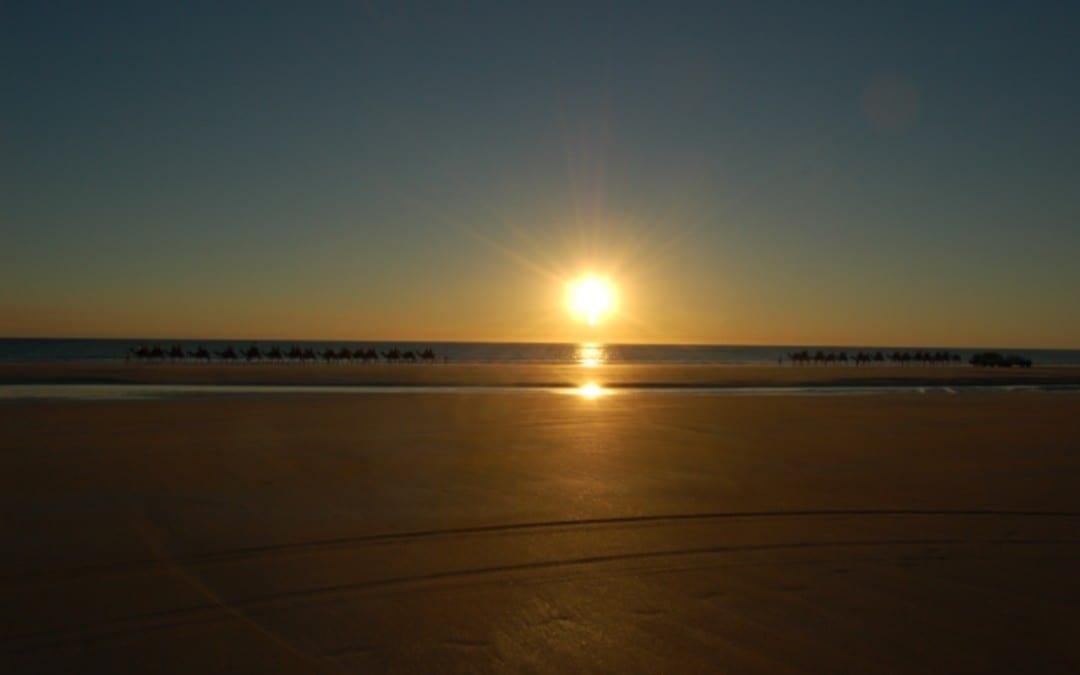 We left the dirt roads of the Kimberleys with a mixture of relief and sorrow but it was great to be able to head to Derby on the tarmac and to be able to have a conversation whilst driving without shouting! Derby was a funny little town – it has 3 claims to fame – the enormous tidle fall, the prison tree and the 120m water trough! It used to be the main mustering point for beef cattle which were being shipped from the harbour and we saw some pretty disturbing B&W pictures of the port during these musters. Now the port is used to despatch mining equipment to the off shore islands – we watched this ENORMOUS truck being loaded onto a boat to sail on the high tide!

The big Boab Prison Tree near Derby has a trunk with a circumference of over 14 metres and the door is a metre wide and two metres high. It was used as a “prison cell” in the 1890s by the local police to lock up Aboriginal prisoners over night, on their way to Derby for sentencing. The trough is just beside the tree and was built in 1910. We decided not to stay in Derby – so we pressed on to Broome. This is very much more a tourist town – lots of tours can be arranged from here and the entire population from the south of WA around Perth seems to move up to Broome to escape the cold of the southern winter. We spent 3 nights here on a very tightly packed camp site – but we were lucky to get a pitch in town. 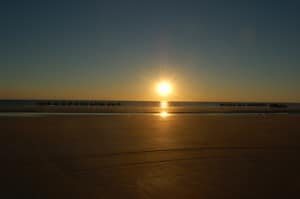 I won’t bore you with the first day there – suffice it to say we spent all day doing domestic things like shopping, washing and cleaning all the red dust and dirt out of out trusty Troopie. The evening was brilliant though, we were invited down to Cable beach by some new friends from Margaret River to have a beer and watch the sun set – what a wonderful site. Everyone including us drove their vehicles down onto the sand to view the spectacle. 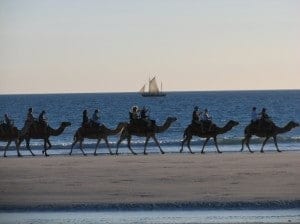 The camels on Broome beach are wonderful – there are 3 seperate caravans of them – making super backdrops for the most wonderful sunsets.

The next day we set off to explore part of the Dampier Peninsula – this is somewhere we would have loved to have spent more time – azure seas, red cliffs and white sands – just beautiful – but we knew time was not on our side so we made do with a luxury day out there with a wonderful picnic and just generally a very relaxing afternoon. 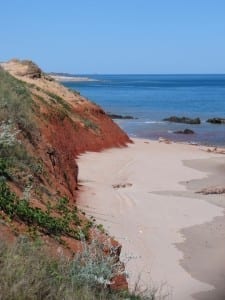 The driving in sand was unusual and a bit disconcerting after the driving on dirt – you need to let your tyres down for more traction, so we were glad we weren’t travelling far that day.

Our plan was to leave Broome the next day and drive the tarmac roads up as far as the Bungle Bungle with a stop on the way. We stocked up with supplies again as we were about to enter another big national park with no facilities whatsoever. This first part of the road from Broome to Fitzroy Crossing probably the least scenic of all the roads we drove – I was driving the 400km and we reached Fitzroy around midday, so not bad going. We had been going to stay at the camp site in the town but we decided not to. The whole place looked pretty awful and so we pressed on to Halls Creek – reaching there about 1830 – so a long old day. Again the town had a very frontier feel to it but a much happier atmosphere. It does beg the question what do these tours do with their clients that travel the between Broome and Kununarra including the Bungle National Park – not a tour I would ever recomend – you would miss so much. 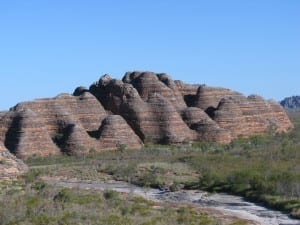 The road into the Purnululu National Park which is the correct name for the Bungle Bungle is quite long, rough and very windy – no caravan and trailers are advised to try the track but we did see several there. We went to the Southern part of the park to do all we could in that region. We walked the Dome walk and to the Echidna Chasm whch was massive. The rock formations there are truly wonderful and it is easy to see why this is a UNESCO World Heritage site. We camped in the Northern camp site – quieter with no generators allowed.We spent a magical 3 days in the park – it was really hot during the day and freezing cold at night – only 3°C by 8 in the evening – evening meals were eaten whilst sitting in our sleeping bags! We did all of the walks that we were allowed to do – there is miles and miles of it yet to be discovered but for now a very large proportion of the park is off limits. Coming out of the park we headed for Wyndam – really scenic – it is the confluence of the great rivers in the Kimberleys. There is a fantastic look out point where you can see for miles. We stayed the night at Parry’s Lagoon which is a wonderful bird watching region – whistling ducks by the thousand. 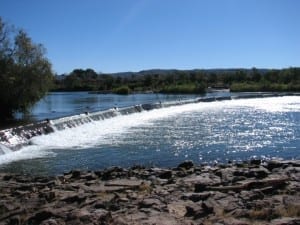 The next day we set off back to Kununarra – we looked to see if by chance the Ivanhoe Crossing was now passable but it still hadn’t been repaired follwing the massive wet season of 2011 when part of it was washed away. We went the long way around back into Kununarra to spend our last night in WA. All that reamained now was to get ourselves back along the same route to Darwin to return our wonderful Britz Troopie. We had a night booked in Darwin – so a good bed awaited us.

We had a wonderful evening there by the lake reflecting on the amazing things we had seen and done in this remote part of Australia. The Kimberleigh region has an enormous amount to offer but you do need to like driving – which we do. The scenery is some of the most dramatic you will find on the planet. The wildlife especially the birds are many and numerous – the people generous and so very friendly. Would I return again – yes in a heartbeat there is so much left for us to explore and discover. I hope you have enjoyed the Blog as much as I have enjoyed writing it. Do contact me if you have any qestions I will be only too pleased to help! 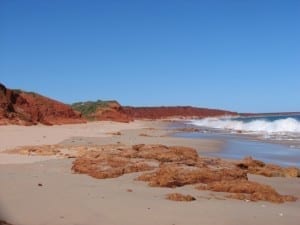